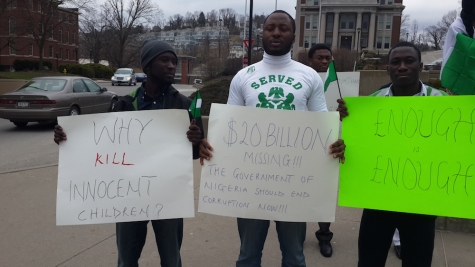 Students, academics and members of the Nigerian community in West Virginia staged a protest at the West Virginia University in  Morgantown.

The protesters condemned the carnage by Boko Haram and the government corruption in Nigeria that led to the “disappearance” of $20 billion from the Nigerian treasury between 2012 – 2013.

This is the latest in a series of protests that have been erupting across Nigeria and around the world, against the Jonathan administration.

There have been over 16,000 terror related deaths since president Jonathan came into power. Corruption is also rocking the administration with a global protest in search of ‘missing’ $20 billion.

Protests have been held at the Nigerian embassy in New York, in Berlin, in lagos and Abuja. There was a brutal police crackdown on peaceful protests in Abuja. Meanwhile the public discontent increased as 23 unemployed Nigerians were killed by the government in a shoddy immigration recruitment scam. The Anti-corruption network has promised even larger protests soon as public frustration and  annoyance increases.