NewsRescue– A May, 2013 article by one of Nigeria’s most renowned writers, Professor Okey Ndibe, “A Case For Canceling The 2015 Elections,” expressed the growing frustration Nigerians have with the apathetic political dispensation of the nations sixth republic and the political madness and brutality of the politician cabal’s power thirst. Considering Nigeria’s crises, the insecurity, oil bunkering, deplorable education, threats of violence by the presidents ‘acolytes,’ Asari Dokubo, Kingsley Kuku and the like, the nation’s state of health care–disease, embezzlement, poor power supply, dilapidated infrastructure, waste disposal, terror, extra-judicial killings, and an endless list of woes, and his view that in regard to these, the current democratic president is ‘comatose,’ in addressing them, Okey wisely opined that the urgent solution for Nigeria would be some form of state of emergency:

Nigeria (needs to) cancel the 2015 elections. The country should then be put in a controlled comatose state, ready for the commencement of urgent, critical care. – Prof. Okey Ndibe

It is true! Nigeria can hardly continue the way it is going. Its politicians are only interested in ‘2015,’ elections and have retired from leading.

Nigeria has a history of military events at times like this when the political leadership totally fails and rules the nation in reckless abandon. Such military overthrows have largely never been ethnic, but have stemmed from a military that could no longer watch politician greed drive the nation into the slums. In 1966 when late Maj. Kaduna Nzeogwu attempted a coup to depose Nigeria’s first republic, he did so according to popular records out of frustration with the excesses of the political cabal. Sentiments aside, many believe that had he succeeded, Nigeria would possibly have had a chance to recover from a trend that has continued at every opportunity. The Buhari-Idiagbon administration took over from fellow northerner, President Shagari, who according to records, Buhari had sworn to, that he will not overthrow, the coup was to address the unbearable corruption of the politicians. 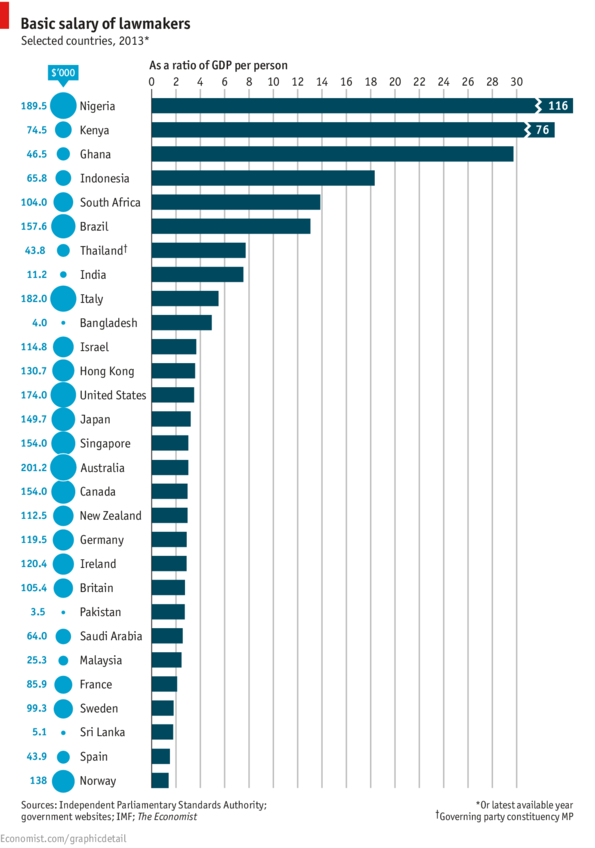 Nigerian politicians and friends, together regarded as the cabal, simply set out to retain power and divide and share the nations wealth among themselves. The highest paid lawmakers in the world, by no surprise, the Nigerian rulers are the worst lawmakers in the world. And their cabal of business tycoons, assist them to retain power with the promise of oil wells and ‘dividends of democracy.’

The United States refers to Nigeria and Africa’s richest man, Aliko Dangote, as ‘Beggar-thy-countrymen Dangote.’ This is due to his system with the ruling class who he buys the presidency for, of being rewarded sole importation and manufacturing roles, hence having autonomy of Nigeria’s manufacturing sector. His business policies in effect cripple small businesses and the nation at large. This is what Nigeria’s political dispensations offers the nation.

According to US cables, these elite are so wicked, they, for instance, recent 5th republic civilian president Obasanjo and his cabal crony, Aliko Dangote, selected a dying ‘recluse,’ late president Yar’adua, who was on dialysis, on treatment for brain problems–with blackouts, and suffering from epileptic seizures, to run for for presidency. See: NewsRescue-How Obasanjo and Dangote Got Nigeria “Here” by Imposing Terminally Sick Yar’Adua- US Intel. Leaks from Terror Mastermind, “Rat” Gusau. When Yar’adua objected for reasons of poor health, Obasanjo told him, ‘God will cure you.’ When Yar’adua said he had no money, Obasanjo chartered Transcorp and Dangote who gave him 5 billion naira, 45 jeeps, with 4 bullet proof and a private jet, to buy the presidency. Nigeria has suffered ever since from these wicked political games.

Listing the problems and dangers the reckless 5th and 6th republics have driven Nigeria into will take an ocean of ink and globe of paper. Way passed its elastic limit, more than just sick, the nation is a rotting carcass, waiting for the jackals and vultures to arrive. The issue is–will Nigeria’s current army chief, who hails from the Igbo ethnic group, a group who have long complained of being sidelined, save Nigeria?

It is said that lot’s of the powers of the military have been cordoned since the Obasanjo regime, but this is only a relative issue and only works when the people are marginally satisfied with the leadership. Despite the paid obfuscation of the presidents few men, it is clear to see that Nigerians are totally fed-up.

A recent non statistical survey NewsRescue conducted on its facebook page, requested to know if Nigerians will employ a man like the current president–who himself admits to being the most disliked leader on the planet–to man their business, club or school. 99% responded with a resounding, no. Unless it was an agriculture company and not their only, many said. The question was in relation to a petition recently started and garnering signatures, by ‘Operation save Nigeria,’ to petition a ‘vote of no confidence’ in the president.

Typical responses included, ‘Yes, if i have thousands of company I will sacrifice one for him just 2 c d worst he can do!,  ‘No , He Cant Even Control His Own House. He Lacks Managerial Qualities.’ And, ‘capital NO Because He is not good to go at ALL but if it’s ANIMALS/FISHERY YES I will.’

No doubt, the army general from Abia state, Gen. Azubuike Ihejirika, has his personal benefits and connections with the president. But will his commitment to Nigeria and desire for the peace, harmony and progress of Africa’s most populous nation get the better of him? Will he as an Igbo and Nigerian leader, show Nigerians the value he, on behalf of his great people and all the  great disenfranchised masses of Nigeria, has to offer? Truth is, Nigeria now has two ethnic groups, the poor masses and the cabal. It is no secret that the traditional leaders and elders have failed and deserve to be reneged. The army can fix the judiciary, force the retirement of all cabal (as Rawlings did to Ghana) and handover soon in early elections to a new crop of progressive Nigerian youth leaders. A new generation is needed, is skilled, is powerful and is ready.

Some may think that inviting a military take over is distasteful or out of vogue. But we are all witnesses to the military take over in Egypt and the fact that the world understood the need for such take-over in favor of the masses, to curb excesses of quasi-dictatorial regimes. Prominent western writers have declared for Nigeria, not much different, recently we read: Good luck, Mr. Jonathan. It’s time you were Impeached, by Joel Brinkley, LA Times, March 2013. We Nigerians and the world know that with the type of democratic system we have, that one that has the highest paid legislators, or legislooters in the world, a proper democratic process of impeachment will never happen. Nigeria is left with basically no choice. In any case, all systems on earth need checks, perhaps a coup will never happen, but it is important the legislooters and political warriors with their super mathematics, know that there is a hammer and it can fall.

Will the decorated Army General. Azubuike Ihejirika bell the cat and save the nation, or will he wait for a patriotic and ambitious junior officer to do the honors?