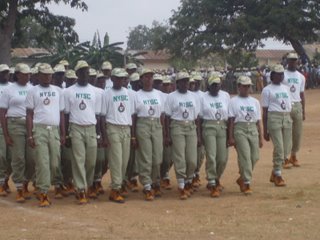 NewsRescue- A major headline in many Nigerian daily’s has been the very sad story of an alleged gang-rape that resulted in the death of a Nigerian youth corper serving in Borno State in Northern Nigeria.

This tale was reported by a new Nigerian newspaper, Next, and in their report, the rape was described(without supportive evidence) to have been carried out by religious fanatics due to the late corper, Mrs Grace Ushang, wearing Khaki pants, the official uniform of the Nigerian Youth Service Corps (NYSC).

NYSC is a one year compulsory service program where college graduates in Nigeria are posted to serve in foreign states to assimilate and interact with other cultures.

The death of Mrs Grace has taken a very serious political dimension as it occurred at a time when an ‘Indecency bill’ was on the congress table. The Leader of a Yoruba association, Afenifere has yelled several threats in relation to this death and an official investigation has been initiated with the Nigerian Security Services department and northern Police force in search of the murderers. But the questions are-

Who raped her and why?

How was it known that the rapists raped this lady for wearing pants?

How was the identity of the rapists known? Perhaps they were not locals but corpers?

Were there witnesses and where are they now and how are they helping in apprehending the culprits?

Why attach a sensational motive to rape? Has the barbaric act of rape ever deserved motives?

The media reports on this event have remained completely empty of answers to these very important questions and though an official investigation has not yet been conducted on this crime, many media have published conclusions [ad#medium]and politicized this sad event with popular captions tying it to the indecency bill.

Other media reports have found a way to link the clearly condemned action of hoodlums and miscreants, officially sought by the State in Nigeria to a totally different, State sanctioned action in Sudan. Two contrasting events with absolutely no common denominator.

We at NewsRescue, on behalf of all well meaning Nigerians, advise tolerance, restraint and due process from all citizens and Nigerian media. We also advise Nigerian media to fully investigate stories and publicize relevant sources to back their tales. It should not be about the story but about the news.

The media must be very careful in not promoting the vicious cycle of intolerance and violence in Nigeria.

Certain southerners have been itching to ‘retaliate’ on Northerners in their vicinity due to this story, but fortunately elders in the states have called for calm as an investigation is in process.

We sympathize with the family of Ms Ushang.

September 22, 2008 – (Leadership) The Women of Compassion Worldwide, an NGO, has reported that it recorded 1,128 cases of rape in Delta State between January and July.

According to statistics made available to the News Agency of Nigeria ( NAN ) at Agbor in Delta, 179 rape cases were reported in January alone in the three senatorial districts of the state.

Out of the total, 57 were juvenile victims, while 122 were adults.

In February, 74 juveniles and 149 adults were raped, while 58 juvenile and 176 adult victims were recorded the following month.

The figures dropped to 31 juveniles and 98 adults in April, compared to 29 juvenile and 90 adult victims in May.

In June, 45 juveniles and 83 adults were defiled, while July recorded 34 juvenile and 82 adult victims.

The Coordinator of the NGO, Mrs Joy Anthony, told NAN that the organisation had to carry out a vigorous campaign against rape in schools in the state because of its rising incidence in the past one year.

She said that the organization started its campaign in 2002 to ameliorate the plight of women and children.

The State House of Assembly had, on July 2, passed a resolution calling on Governor Emmanuel Uduaghan to direct relevant agencies to intensify efforts to enlighten the people on the dangers of rape.

Similarly, the Ministry of Women Affairs, Community and Social Development inaugurated a 14-member committee on the campaign against rape on Aug. 14.

Evidence yet to support the propagandized motive for the rape

This excerpt from Next goes to prove that the publicized assumption of mens rea for this horrendous act by whoever is culpable is yet unfounded and unsupported.

Paul Adah (PDP, Cross River) had, in a motion, said Miss Ushang was serving with El-Kanemi College of Business Administration on September 27. He said the deceased left the Corpers’ Lodge, around Customs area of the state capital, at about 6.30 pm on the day of her death in search of food within the neighbourhood – only for her corpse to be found beside a nearby river at about 8.00 pm.

Mr Adah said the windy weather in Maiduguri that day provided a cover for Miss Ushang’s assailants to as sault and murder her in cold blood.

The lawmaker added that he was worried that the assailants attacked her on ground that she was wearing a Khaki Trouser, the official uniform of youth corps members which they considered as indecent dressing.

He also said that the medical report confirmed that Miss Ushang was physically assaulted, thereby sustaining grievous injury which resulted in her death. -Next