Nigeria’s power and profit Merchants are lucid investors. They know where to shop and where to invest. They know that destinies are for sale in a country that cannot provide quality education, health, infrastructures among others for her citizens. They know that it is a formidably enriching enterprise to invest on incompetent rulers whose subjects are drenched in rains of indolence.

A ruler they can rule over and control! They know that government is a big business, especially where corruption geometrically grows in intensity and in space. To them, when they are dealing with ‘citizens’ it is take my money but let me take your future.  To rulers, it is ‘take my money and reign, but let me rule!’ The vultures gathered again on Saturday! They called themselves players in the Oil, Road Construction, Real Estate, Power and other sectors.

The Investment Private Offer (IPO) was fully subscribed!  Aso Rock, Nigeria’s seat of power was the Stock Exchange venue. In one night and like Night Marauders, 21 Billion Naira was on the President’s Table, the table of the one who rang the bidding bell! And as usual, Nigeria is gone again. Firmly  in the hands of its Share Holders. It was a Right Issue, not a Public offer! The closest thing to the act of these unified Buccaneers is the history of slave trade and the bondage of future generations, especially those from the clans of the poor. Indeed, they are players in the Oil Sector! Afterall, Nigerians recently  had to pay  2.3 trillion Oil subsidy  price that never was to them.

The unresolved $20 Billion that Sanusi alleged with the failure of Ngozi Okonjo Iweala to lay on the street’s table the report of the forensic audit she promised when the heat of the disappearance was hot. Players in Road Construction, ever working on sites but hardly any motor able road; Players in the Power Sector who are experts in distributing darkness; and without shame, collecting money for darkness well shared! A country that has become a joke for unrepentant looters cannot but have many players on its corruption field! Nigerian Electoral Law forbids this lawlessly donated monies; INEC that is supposed to watch and challenge this brazen break of law is impotently helpless in the face of ubiquitous impunity.

As its usual ‘medicine after death –strategy, I guess the guideline for funding campaign will be released by INEC after election; just as it released the guideline for campaign, months after TAN has ‘presidentially’ and serially violated it.  Anyway, those who say that Jonathan is ‘doing it’ like Obama should ask their Mentor how much tax is prepared to pay on the 21 Billion Naira?  Federal Inland Revenue Service, here is work for you. Those who have ‘religionised’ politics and politicised religion should equally monitor whether the President, ‘the good Christian’ pays his tithe on this.  Remember, 2.1 Billion is his tithe. Let him not play you like players in other sectors who, by law, criminally donated these monies.

This may help some greedy pastors but neither the principal sum nor its tithe can buy God! Seriously speaking, how can we build democracy, supposedly, ‘government of the people by the people and for the people’ around gluttonous pests that we often erroneously refer to as ‘consequential’ persons and corporations and still expect it will serve the ends for the people and good governance? We have Oil, we have Oil Players, yet, we buy oil products at prices higher than countries that do not have oil and the so called players. We have limestone, gypsum and allied mineral, yet cement here is costlier than countries that do not have these. What is the comparative value of these players to their more nationalistic peers elsewhere who are not driven by cruel profits in other climes? Have you ever reasoned that any man who goes to the rich to raise money for election and at the same time go to the poor to ask for votes; promising to protect the interests of the two can never be trustworthy?

The interests of the two differ and conflictual. Even though we do not expect Angels to come down from heaven and govern our country for us, we must look for the Cads whose self-interest aligns with that of honest people. The best things in this world; peace, joy, sound sleep and even life are not what money can buy. Money from filthy rogues who take away trillions and return millions can never lay foundation for enduring democracy nor become atonement for continual corrupt practises. 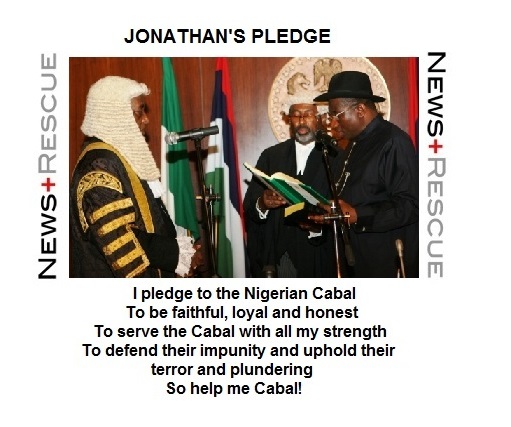 We cannot afford to hand over the historic fallacy that money can buy anything, including democracy and justice to our children. It is bad enough that we are already living with the culture that one cannot aspire to be President, Governor and Senator and so on without coughing out millions for form for expression of interest. To further this, by allowing economic power pirates to fraudulently and illegally fund democratic process is to bury ethos of democracy and rob the people, its essence, the power to act on their own behalf. The patterns of practice and what they reveal about political actors mean much to me. You cannot be funded by Satan and expect the Angel Gabriels of this world to make up your government. I pity those who cannot smell the coffee from Abuja Power Café, especially the ignorant fence-sitters. I pity the short sighted ones who are afraid of taking position at junction of history even though the available roads for decisions are bad. They are the most miserable souls who will neither know defeat nor victory. They are the  elements in today’s Nigeria  who insist that there is no difference between PDP and APC without providing alternative to both.

To help them; on the active players; there is difference between Buhari and Jonathan and there is difference between Sambo and Osinbajo. Before these Spectators in the affairs of their country return from their Disneyland; a couple of these would have become the drivers of their national destiny and the navigators of their national life. On the face of it, I would prefer a country that is safe and secure to a country where hundreds are killed, kidnapped and abused daily without any remedy. I would prefer a country of Prosperity to a country of Austerity!  So, when I go out to vote in February, God willing, it will not be about the TANinted ‘Teachers’ who mistake Ebele for Martin Luther. It will not be about the  opportunistic Monosonist (Single Seller) and his mopolist – friends who buy and sell all opportunities, including democracy, it will be about my children and their peers who deserve to know the true meaning of TRANSFORMATION and the benefits of its experience!
Gbenro Olajuyigbe is an Abuja based Human Security Expert and a Human Rights Activist. E:Mail: [email protected] –SR