Plebiscite campaign poster urging the inhabitants of Bama, Gwoza, Mubi and some part of Adamawa province to cast their votes in favour of joining Nigeria in 1961. 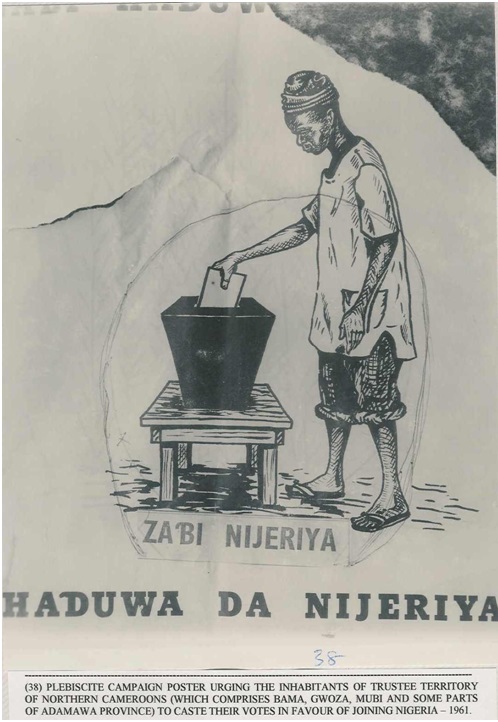 This picture is the campaign poster by Nigeria-of-1960s. The campaign of haduwa da Nigeriya (meaning joining Nigeria) was championed by Sir. Ahamadu Bello, the premier of the Nigerian’s northern region, urging the inhabitants of the settlements that are now under the “new caliphate” to join Nigeria, in 1961. These towns were initially part of Northern Cameroon. They comprise Bama, Gwoza, Mubi, and some part of Adamawa state. These people chose Nigeria over Cameroon in 1961, with a hope of higher prospect, and better security. Alas! Today, 53 years after their preference of Nigeria over Cameroon, they, and our gallant soldiers run to the latter for safety. Nigeria under GEJ failed them. GEJ government failed to protect them from invasion due to personal ambition, and the I-don’t-give-a-damn attitude. I wonder how easy it would have been, had Cameroon, Chad, or Niger contemplated annexing this blessed terrestrial land in the last five years. It would take a great deal of determination to restrain oneself from envisioning an answer. The answer is not what any Good Samaritan would like to deduce.

The government would always want Nigerians to be optimistic, and prayerful in the present circumstances bedevilling the nation. How could Nigerians be hopeful, when year in year out, day in day out, things a getting much worse while the commander of NTA as Kwankwaso posit, is watching with bewilderment? The guess of how the decision of Gwozans, Bamans, Mubians, Vimtims, and others, campaigned to join prosperous Nigeria in 1960s would have been if it were to be made today, is as good as everyone’s.

The other day, the government made several clamours about negotiations and the release of the Chibok girls before the end of October. It now turns out to be what it has always been, noise, deceit and politics. One wonders what is on the horizon to compel the government to negotiate the release of these girls when they have spent over two hundred days in captivity. Perhaps, to give credence to the GEJ declaration to contest 2015 elections.  Bad politics. By all intents, if the government believed in negotiations as a tool to ending this cadaverous problem, they would not have K-leg previous negotiation efforts by Dr. Ahmad Datti, the valuable link of Shehu Sani, and the facilitation of Ahmed Salkinda, or at least punished those responsible for the broke down of the peace talk if they were from the side of government.

Now, cease-fire has become the epitome of the crisis escalation. Please note what Dailytrust of 4th Novermber, 2012 reported exactly two years ago about the cease fire “A social commentator in Maiduguri, who does not want his name published, said he has every reason to juxtapose between the killing of General Shuwa and the purported ceasefire offered by one Abu Muhammad Ibn Abdulazeez, supposedly on behalf of the Boko Haram leaders” the paper point out further “General Shuwa was killed just a day after the purported ceasefire offers…this goes to show that the statement was made by either a splinter group or a vested interest somewhere, but definitely not by the mainstream leadership.” We haven’t moved an inch since then. We now have Danladi’s declaration of the cease fire along with the fall of Mubi, the commercial centre of Adamawa state, and Vimtim, the home town of the current Chief of Defence Staff, Air Chief Marshal Alex Badeh, into the hands of the insurgents. This crisis is a two-lane one-way traffic, you either genuinely negotiate, or you decisively fight to finish. Shekau has busted in his latest video that he started with a knife, but he has now gained over 20 APCs. This statement alone is a closing proclamation for any possible immediate cease fire, at least for now.

Previous genuine negotiations failed because of ego, and bad politics. When the Northern elders made recommendations on how to end the insurgency at the very initial escalation of the unrest, the Jonathanians resorted to blackmail the northern politicians, and the elders as the sponsors of the group, something they have been cogitating since 1st of October 2010. This threat of blackmail has sadly made the northern leaders to become onlookers, in the face of another threat on their lives by the insurgents.

The attitude of the President in responding to the carnage of devastation by the insurgency till date, has not been encouraging. For every major attack on the people of Nigeria, the President hardly shows any compassion towards their misfortune. If he did not blame it on the northern politicians, or the opposition parties, he will be there dancing in a campaign tour.

The press releases by his aides have become a routine copy and paste “government is at the top of the situation” without really being on anything, not to mention its top. Although, it appears this attitude is selective, and this is what is giving credence to the believe by the north, or perhaps the Muslim community in Nigeria, that the President gives no damn about them. Else, how can the President depend himself in the presence of the Lord, when he chooses to visit victims of a collapsed church building, that has no building permit, within days, and refused to visit the internally displaced people in the north east for years, or condole with Ibrahim Elzakzaky over the unjustified killing of his followers by Lt Col. S. O. Oku, including three of his biological children? The vehement refusal to also pay a condolence visit to parents of the Chibok girls, except when he was persuaded by a 19-year-old Malala was not a golden act nor does it depicts a picture of a responsive leader.

When the Civilian JTF expelled the insurgents to Sambisa forest, it was expected that the Nigerian state and its military will engage them in their newly defined territory, without the fear of civilian causality. Unfortunately, to the utmost dismay of Nigerians, for two years, the group was allowed to metamorphose into a full combatant militia, with sophisticated modern armaments, launching attacks from their safe heaven unto Nigerian territory and safely retreating back with bounty of huge cache of arms from the Nigerian army. This has been the trend until the group added the list of the bounties to include humans. When the Nigerian government failed to respond to the new dimension added by the insurgents, mountains of excuses were given for the failure, which Nigerians were trying to grasp before another one comes on board; Territorial annexation.

The group first lunched attacks and overtook Gwoza, which they named as their headquarters. No reasonable government at this point will continue to use the same method of engagement without a discernible review of strategies to match the new emerging threat. Here we are today, helpless. I bet no Nigerian is feeling safe with the current government’s attitude, no matter his political, ethnic, or religious deposition. The threat to Nigerian survival is real, as the incompetence of the present government is factual. They are all staring us in the eyes. Today the insurgents have gained territory and are continuing to cave out more. They have left Maiduguri, they have left Sambisa, and they are at this moment in time a government of their own. If Nigerian military has failed to defeat the insurgents previously because they were not trained to engage in a guerrilla war, or in a forest, like Sambisa, then the opportunity is now. Let them face the insurgents as government-to government. We know their training is to depend our nation from an external threat, and they have received adequate training to do so. Hence, failure this time is not an excuse.

There should be a comprehensive change of strategy in the approach to this crisis. Our field soldiers are trying their best within the limited available armament they possess. Their lives are important to them as ours are to us. Best practices on how to defeat insurgents should be holistically be implemented. The shift of blames, from North/South, Muslim/Christians, PDP/APC, should be halted. Politics should be administered with caution. Nigerians must show their commitment to support the government in dealing with the problem, but more importantly, the government must restore hope and confidence to Nigerians especially those directly affected by the crisis by taking steps outside politics.

Mahadi Lawan Yakubu, is a research fellow, and a concerned citizen