In a tweet early this morning, the Avengers claimed that even with the high presence of Nigerian troops in the troubled Niger Delta region, it has bombed two oil wells belonging to the multi-national company.

The NDA tweeted below very early on Tuesday…

“This is to show the whole world that Nigeria Military is good in harassing innocent Civilians.
“RMP 24 and RMP 23 are Chevron Swamp Highest producing Wells. #Boom.” 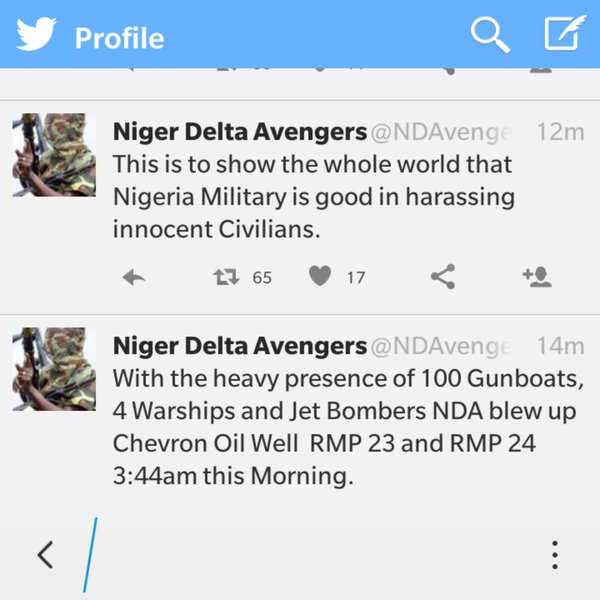 The group in its tweet further claimed that the Nigeria’s military is only ‘good at harassing innocent civilians’ as it was not able to stop their bombardment even with all the arsemals it claimed to have brought to the creek.

The federal government, yesterday, had deployed an armada of five warships, 100 gunboats and fighter jets to the creeks of the Niger Delta, in response to continued bombing of oil and gas pipelines by Niger Delta Avengers, NDA.

This heightened tension in the coastal communities of Southern Ijaw Local Government Area, even as helicopter gunships were seen hovering at low altitude in the predominantly riverine council.

Bayelsa travellers from the hinterland, confirmed the large military presence in the tricky mangrove swamp of the council, which at the height of youth militancy, had the largest concentration of militant camps in the Delta.

This is a developing BREAKING NEWS, stay tuned for details.