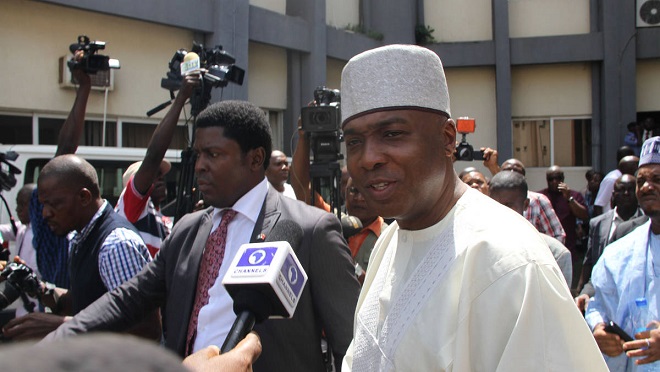 The Code of Conduct Tribunal on Wednesday adjourned the trial of Senate President, Bukola Saraki, indefinitely, after a star witness for the prosecution, Michael Wetkas, failed to show up.

Saraki’s trial was on May 25 adjourned till today, for the cross-examination of the witness, Michael Wetkas, to continue.

The tribunal chairman, Danladi Umar, said the adjournment was to give the court time to hear other cases.

The prosecution and defence teams also said the break would allow them prepare their cases better.

On reading this news, a commentator, NauBiko said, “That’s my faith in Buhari down the drain. Politicians are all the same. Most people have said the same thing about Saraki and the obvious has just happened.”

A prosecutor at the  Code of Conduct Tribunal on Wednesday told SaharaReporters that contrary to rumors in the media the corruption trial of Senate President Bukola Saraki had not been adjourned “indefinitely” are completely untrue.

The source who didn’t want to be named said the reason trial could not come up today was due to a conflict in another trial involving the former governor of Jigawa, Sule Lamido before Justice Ademola Adeniji at the Federal High Court in Abuja. He also stated that a second member of the tribunal called in sick making it impossible to get a new date yet.