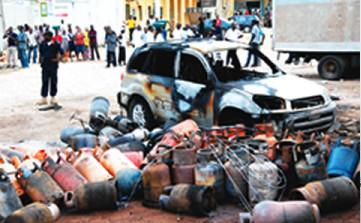 The quick succession in which the explosion occurred made customers and neighbours to scamper into safety. Many expressed fears that it was a bomb explosion.

But an eyewitness account said the first explosion occurred at about 5:17pm when a gas cylinder exploded. A jeep parked close to the gas dispenser went up in flames.

Another witness said the retailer took delivery of the gas supply on Wednesday.

“They just supplied him the gas yesterday (Wednesday). We are surprised because we still don’t know what happened. We only heard a big bang,” he said.

The retailer was said to be receiving treatments at an undisclosed hospital as of the time of filing this report.

Stern looking soldiers were seen leaving the plaza when our correspondents got there.