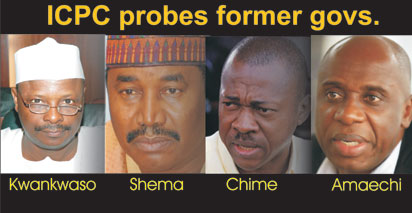 The independent Corrupt Practices and other offences Commission (ICPC) has commenced investigations of four former governors following petition against them.

The four governors are former governor Rotimi Amaechi of Rivers, Sullivan Chime of Enugu, Ibrahim Shema of Katsina and Rabiu Kwankwaso of Kano.

Already four teams have been raised to visit the states to check the books of the states to establish the allegations against the governors.

Sources at the commission told Vanguard that the teams departed Abuja Monday morning to the various states to carry out their investigations.

A source at the commission who does not want his name in print because he is not authorised to speak on the matter told Vanguard that the allegations bother on dubious awards of contracts as well as contracts awarded to cronies and relatives of the former governors‎.

According to the source, the commission is committed to ensuring that all petitions are investigated to the ironical conclusion and those indicted or found to have compromised would be brought to book.

“We will ensure that we thoroughly investigate all allegations brought before us so that no body would be left in doubt about our commitment to fighting corruption. The chairman has dispatched a team to the affected states and they are expected to report back in the next two weeks. No body would be spared if found culpable” the source said.

When contacted the resident media consultant to the commission, Folu Olumiti neither denied nor confirmed the story.

He told Vanguard: “I don’t have any comment. I don’t want to comment on an ongoing investigations” before cutting off the line.