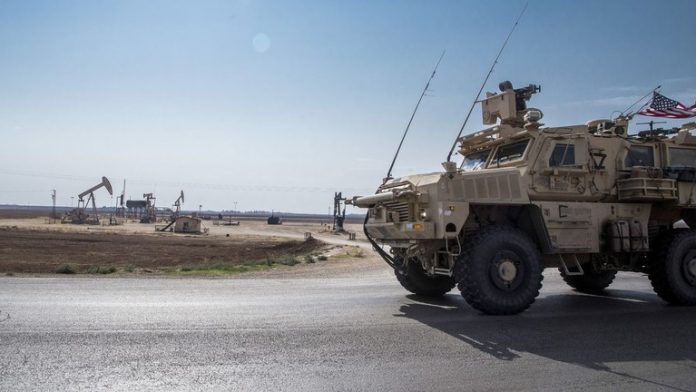 China has slammed the US for “banditry” in Syria, claiming that Washington’s years-long military occupation and “plundering” of Syrian resources has pushed the country to the brink of a “humanitarian disaster.”

During a press conference on Tuesday, Chinese Foreign Ministry spokesman Wang Wenbin was asked to comment on recent Syrian media reports that US forces had transported a large amount of “looted oil” from Syria to Iraq earlier this month.

“We are struck by the blatant and egregious nature of the United States’ plundering of Syria… Such thievery is exacerbating Syria’s energy crisis and humanitarian disaster,” he said, citing Syrian government figures claiming that “over 80% of Syria’s daily oil output was smuggled out of the country by US occupation troops” in the first half of 2022.

The level of US greed in stealing resources from Syria is as striking as its “generosity” in providing military aid in the billions or even tens of billions of dollars.

“Whether the US gives or takes, it causes turmoil and disaster in other countries, and the US reaps the benefits for its hegemony and other interests,” he added. “This is the result of the so-called “rules-based order” in the United States.”

On January 14, Damascus’ state-run Syrian Arab News Agency (SANA) reported that “a convoy of 53 tanks loaded with stolen Syrian oil” was transported from Hasakah province to US “bases in Iraqi territory,” noting that the operation was carried out alongside local Kurdish militants who have long received American support. According to the outlet, 60 more trucks smuggled stolen oil and wheat into Iraq earlier this month.

“The Syrian people’s right to life is being ruthlessly trampled on by the US. “With little oil and food to go around, the Syrian people are struggling even more to survive the harsh winter,” Wang added, demanding that “the US account for its oil theft.”

The United States first sent troops to Syria in 2014, beginning with a contingent of special forces and followed by more conventional ground troops the following year, most of whom were embedded with Kurdish fighters in the country’s oil-rich northeast. Though then-President Barack Obama claimed the deployment was solely to combat Islamic State (IS, formerly ISIS) terrorists, Washington had long intervened in Syria’s war against jihadist groups, sending and overseeing countless arms shipments to rebels seeking to overthrow Damascus’ government since 2013.

Though American involvement in the conflict slowed under the next administration, President Donald Trump stated in 2019 that some US troops would remain in Syria “for the oil,” implying that Washington would simply “keep” the energy resources.

Subsequent reporting in 2020 would reveal that the Trump administration had approved a deal between a US energy firm and Kurdish authorities in northeast Syria to “develop and export the region’s crude oil” – a contract immediately condemned as “illegal” by Damascus. However, while that particular deal fell through after President Joe Biden took office, Syrian authorities have continued to accuse Washington of plundering the country’s resources, and approximately 900 US troops remain in the country illegally.