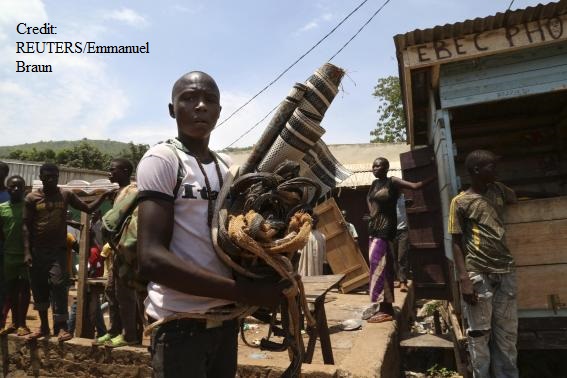 Featured Image: A Christian man carries property left behind by the Muslim community who were evacuated from the PK12 neighbourhood in Bangui April 27, 2014. The relocation involves moving Muslims who have sheltered from sectarian violence for months in the PK12 neighbourhood, to the north of the country, towards the border with Chad. REUTERS/Emmanuel Braun

By Emmanuel Braun and Crispin Dembassa-Kette

(Reuters) – Peacekeeping troops escorted around 1,300 Muslims out of Bangui on Sunday, triggering looting and removing one of the last pockets of Muslims from the capital of a nation torn apart by religious violence.

Foreign troops have escorted thousands of Muslims to relative safety in the north of the Central African Republic. But some leaders fear that will make permanent divisions that have led to talk of partition after 18 months of conflict.

Peacekeepers stood by as Christians, some armed with machetes and bows and arrows, swarmed into and picked apart houses in Bangui’s northern PK12 neighborhood, which had been a Muslim stronghold in the majority Christian south.

“We are leaving to save our lives,” Mohamed Ali Mohamed, who was born and brought up in the area, told Reuters as fellow Muslims tied jerry cans to trucks ahead of the trip.

Some of the departing Muslims torched their cars as they could not take them in the convoy but did not want Christians to be able to use them once they had left.