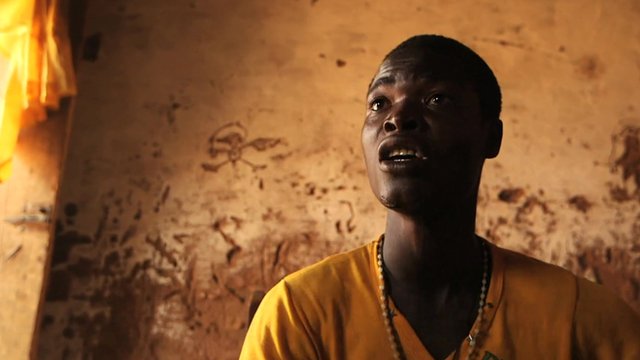 BBC: Sectarian violence in the Central African Republic has reached a new extreme with an act of cannibalism in the capital, Bangui. The BBC’s Paul Wood has heard a graphic first-person account, which some might find upsetting.

The buses throwing up clouds of red clay dust had yet to rub out the ugly bloodstain in the dirt. A Muslim man had been murdered here a few days ago, by Christians. His limbs were hacked off. Then one of the crowd ate the flesh in a public demonstration of cannibalism.

We were filming nearby when a young man in a yellow T-shirt came up to talk to me.

With a sickening feeling, I realised I was talking to the cannibal.

Camera phones had captured the crime. The pictures show a charred and dismembered body being dragged through the street by a screaming mob. A man held a severed leg and bit down into it.

The same, slightly built figure was standing in front of me. He was even wearing the same yellow T-shirt as in the video.

A few minutes earlier, I had spoken to a horrified witness, Ghislein Nzoto. He said it began when the Muslim man was dragged from a bus.

“People started attacking him, kicking him. They smashed a rock against his head. They kept going even after he was dead.”

He went on: “They set the body on fire. There were about 20 youths. They cut a whole leg off. Then one of them started to eat it. He bit into it four times and swallowed. It was raw, not burned.

“This was right in front of the Burundian peacekeepers. One of the soldiers vomited. Then he chased people away with his gun.”

The cannibal’s name was Ouandja Magloire – though he told me he was now known as “Mad Dog”.

There was a busy market either side of the street, people hawking brightly coloured cloth, skin-whitening creams, and piles of fresh loaves. We went somewhere a bit quieter so I could ask him why he had done this awful thing.

He told me that Muslims had killed his pregnant wife, his sister-in-law, and her new baby.

He saw a man sitting on the minibus – he thought looked Muslim so he decided to follow the bus. More and more people joined him until he was at the head of a mob.

“We followed him,” he said. “If he reached the intersection, the Burundians would protect him. So we told the minibus driver to stop. The driver said: ‘You’re right. He is a Muslim.'”

He described what happened after the man was dragged off the bus: “I kicked his legs out from under him. He fell down. I stabbed his eyes.

“Muslim! Muslim! Muslim! I stabbed him in the head. I poured petrol on him. I burned him. Then I ate his leg, the whole thing right down to the white bone. That’s why people call me Mad Dog.”

On the video, “Mad Dog” is seen happily chewing, his cheeks bulging. He waves a leg about in between mouthfuls. I returned to the question of why he had done this.

“Because I am angry,” he said. He had no other explanation.

During our interview, he betrayed no sign of that anger, or of pride, or regret, or of any emotion at all. His tone was neutral, his eyes and face blank.

The witness I’d spoken to, Ghislein Nzoto, said no-one in the busy street had tried to help the victim.

“No-one at all,” he said, shaking his head. “Everyone’s so angry with the Muslims. No way anyone was going to intervene.”

But the most disturbing thing happened the next day, he said. “Mad Dog” returned, having saved some of the dead man’s flesh. He put it between two halves of a baguette and ate it, with a side of okra.

Ghislein didn’t agree with Muslims being killed but it was at least something he could comprehend, he said. Like most other Christians I spoke to, he was both appalled and baffled by the act of cannibalism.

Perhaps, he agreed with me, this atrocity was simply the act of an unbalanced individual. Or it might be the result of sectarian hatreds.

Or – his final explanation – this had something to do with sorcery.

Many of the Christian fighters we met – the anti-balaka – believe in magic. They go into battle wearing a variety of amulets. A group of fighters at a checkpoint told me some of the amulets contained the flesh of men they had killed.

“We are bullet-proof,” their commander told me, chuckling.

There has been, as far we know, no other act of cannibalism is this conflict. There is, however, precedent in the Central African Republic.

The “Emperor” Bokassa, who ruled from 1966 to 1979, was accused of having his enemies cooked and served at state dinners. Paris Match published photographs it said were of the body parts of children in a fridge at his palace. (After he was deposed, Bokassa was tried. While he was convicted of murder, he was found not guilty of cannibalism.)

There is no long history of sectarian hatred in this country. It exploded out of nowhere after Muslim mercenaries from Chad and Sudan joined the Seleka alliance that swept to power.

The Seleka were accused of murdering Christians in large numbers, of raping women and looting as they crossed the country. Christians formed self-defence groups, doing their own share of killing.

Reporting a simple “Muslim against Christian” story misrepresented what began as ethnic and political violence, they say: It polarised the two communities.

This is a complex country – with perhaps 200 ethnic groups and languages – but increasingly people see themselves this way. Last Friday, when the president resigned, we filmed a Christian crowd happily singing: “Today, we’re going to kill Muslims.”

“Mad Dog” Magloire’s crime was a singular act. It might have been the result of his own demons, not a symptom of a sectarian conflict.

But as we interviewed him, a small crowd gathered, all Christian. They shook his handed and patted his head, smiling and laughing as he, for the first time, smiled broadly. To them, he was a hero.

That does not augur well for the future of the Central African Republic.