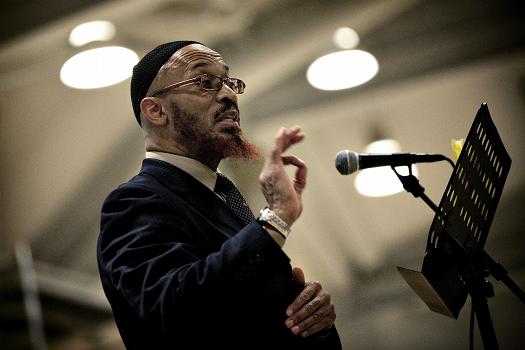 NewsRescue– Prominent Islamic scholar, Sheikh Khalid Yasin sharing Nasiha after Jumuah (Friday prayer) in a video clip on facebook has blamed the woes happening to Muslims on their “bad behavior.”

The charismatic globally renowned scholar chastised Muslims for failing to be accommodating with Christians as many Christians are with Muslims.

He communicated that whereas Christian families are tolerant of their Children, who dress in Islamic garb and pray in the Islamic way, many eventually becoming Muslims, Muslims are not so accommodating of Christians.

This he said is unlike the behavior of the noble Prophet of Islam whose uncle, Abu Talib who did not convert to Islam, yet Allah (God) sent help to the Prophet through him. Abu Talib defended and protected the prophet during his mission in Mecca, it was after he passed that the prophet left Mecca.

He said Muslims want to come to Christian countries and benefit, but then say they can not sit with and eat with and pray with the same Christians. “The Muslims their heart is hard,” he said.

Further highlighting this poor attitude and lack of tolerance of today’s Muslim, he gave the example of Egypt, where the Muslim Brotherhood led nation allowed Muslim oppression of Coptic Christians in Egypt. It was not long after they oppressed the Christians (and also Shia clerics in Egypt, some of whom were beaten and killed on the streets in public annoyance over the crises in Syria) that the country was seized from them, and they were scattered.

“Muslims have very bad behavior,” he said, and this is why Allah took the Dawaah (evangelism) from them.

Sheikh Yasin in the short video clip recommended Muslims be more tolerant and compassionate toward Christians, comparing he pointed to the prayer-room used as a Mosque they were standing in, “that it is a Church the Christians gave to Muslims to use for prayers.” Muslims are accommodated much more in Christian domains, a generosity that is hardly reciprocated. This in his words is leading to the loss and down fall of Muslims and reducing their capacity for effective Dawaah (evangelism).

The Sheikh  further said that the people born in Muslim countries, Arabs, Asians, Africans, they are no longer spreading Islam. The Dawaah (evangelism) is now with the new Muslims, not the born Muslims (who believe they have inherited Islam and are too arrogant), because of this failure and bad personal behavior.