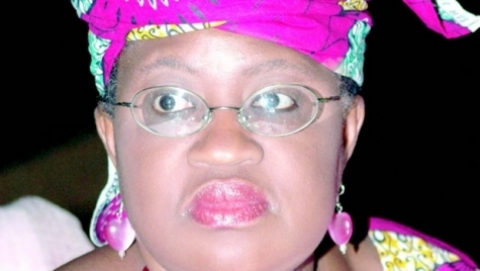 Dotun Oloko, who last week sent an open letter to the Minister of Finance and Coordinating Minister for the Economy concerning the situation in Nigeria, on Saturday urged her to resign, saying she is not a “fit and proper person” to be a Minister in Nigeria.

In his new letter, entitled “Fear or Favour,” Mr. Oloko referred to his previous engagement with Dr. Okonjo-Iweala concerning a group of international non-governmental organisations relating to the sale of the OPL 245 oil licence, about which he had exchanged letters with the Minister.  He reminded the Minister she had also told his group to concentrate their efforts on Attorney-General Mohammed Adoke and Petroleum Resources Minister Alison Madueke, whom she felt were “culpable” in their performance.

“In your 19th May 2013 response to our first letter which was dated 1st May 2013, you advised that you had referred the matter to the Attorney-General and the EFCC,” he reminded the Minister.  “By way of feedback you advised that at a meeting between President Jonathan, Attorney-General Adoke and yourself, the Attorney-General berated you over your response to our letter. You also advised that you had taken unorthodox steps to prevent any further dispersal of the funds. In light of the views and opinions you had expressed on the matter, we wrote to you again in September 2013 in the wake of the draft report by the House of Representatives Committee that investigated the sale of the OPL 245 licence. In our letter we requested ‘that you urgently confirm that permission has not and will not be given for the release of the remainder of the funds arising out of the Resolution Agreement that are currently held by the Nigerian government with JP Morgan Chase in London.’”

Upon receiving that letter, Okonjo-Iweala begged him to withdraw it because she and her family members would be at risk if she acted on the request contained in the letter, he recalled.

“Your response is in breach of the oath of office that you swore when you undertook to perform your duties without “fear or favour,” Oloko wrote.  “If indeed you were afraid as you claimed, then the right thing to have done would have been to resign from the office and give your reasons publicly. I can inform you that my international colleagues were genuinely concerned about the fears that you expressed and subsequently prevailed upon me to agree to the withdrawal of our letter while we explored other avenues. Nigerians and President Jonathan may wish to reflect on the image of Nigeria that you have put forward in this regard.”

He explained to the Minister that he was prompted to write his open letter to her because of the widely publicized letter of 3rd December 2013 letter from former President Obasanjo to President Jonathan particularly with regard to Jonathan’s role as the nation’s Chief Security Officer and the growing insecurity in the land.

“Your claim as a senior minister that you were in fear for your life and that of your family members should you do what was asked of you would appear to support former President Obasanjo’s criticism of President Jonathan on the particular matter of security in Nigeria,” Oloko said, adding that there were other opinions she put forward which should be of equal concern to President Jonathan and Nigerians.

“In an effort to deflect attention away from yourself you suggested that we should concentrate our efforts on the Attorney-General and the Oil Minister, who you felt were culpable. I can inform you that we have duly noted your comments in this regard and I can assure you that we are acting on it. Again Nigerians and President Jonathan may wish to reflect on the image of Nigeria that you have put forward when you as a serving minister should chose to point the finger at your cabinet colleagues while leaving it up to others outside of the country to take action.”

He said Nigeria needed more public officers such as Dora Akunyili, Nuhu Ribadu and Lamido Sanusi who have demonstrated in office that they are not afraid to live up to their duty to our country.

“You however, have revealed that you are constrained by fear and it is therefore incumbent upon you to resign your office with immediate effect,” he advised.