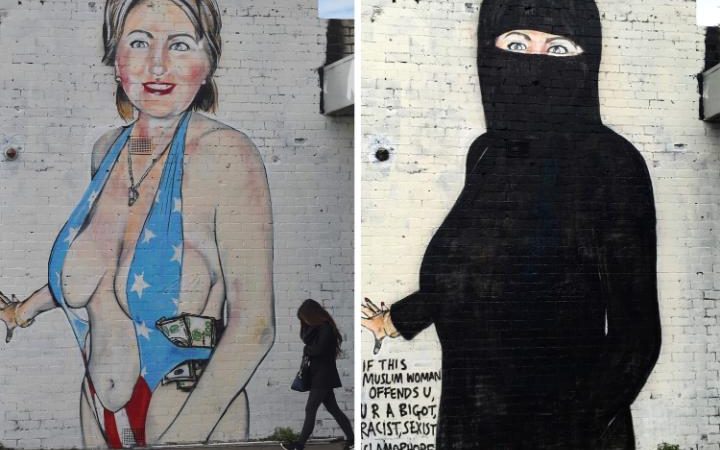 A mural of a scantily-clad Hillary Clinton created by an Australian artist was briefly changed into a Muslim woman dressed in a niqab, following a complaint by the local council. However, the latest makeover also left the authorities unimpressed.

After seeing the mural of the woman in the niqab, with just her eyes visible, which was created by a street artist known as Lushsux, Maribyrnong Council in Melbourne did not take kindly to the new creation.

The controversy originally started after Maribyrnong Council threatened Lushsux with a fine after he painted a mural of Democratic presidential candidate Clinton wearing a star-spangled swimsuit with $100 bills tucked into it. Lushsux said he got the idea from a meme on the internet and wanted to paint it so “the virality of the meme has now turned into the virality of the wall.”

The council threatened @lushsux with a fine if he didn’t remove his mural of Hilary. This was his response.Thoughts? pic.twitter.com/Wb7VVT6szk

However, not everyone shared his vision of the art he was trying to create.

“We believe that this mural is offensive because of the depiction of a near-naked woman, not on the basis of disrespect to Hillary Clinton, and it is not in keeping with our stance on gender equity,” the council’s chief executive, Stephen Wall, said.

Lushsux confirmed that the mural of the Democratic presidential candidate was not removed “because it was Hillary” rather because of her lack of clothes. At least, that’s what the council claim, though it’s something that he disputes.

“I don’t quite understand why that is offensive by any means. She is not naked,” he told RT.