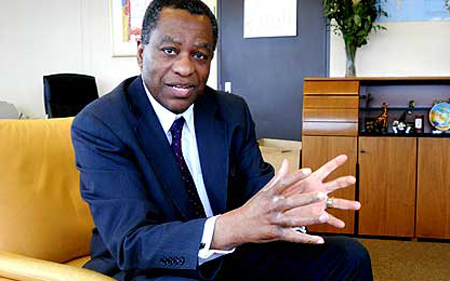 Minister of Foreign Affairs Geoffrey Onyeama has said the currency deal Nigeria signed with China during President Muhammadu Buhari’s visit was not a swap as widely reported.

He briefed State House correspondents yesterday at the end of the Federal Executive Council (FEC) meeting on the gains of the one week visit.

According to him, the deal was a way for  Nigeria to  benefit from the internationalisation of the Chinese currency.

He said: “It’s not really a swap. What it takes is that as the Chinese economy goes strong, there is some pressure on them from the trading partners, international financial institutions. They agreed that the money should be internationalised.

“So, they started that for a while. They were protecting it also. They did not allow it to be fully exchangeable. But now, their economy is fully strong, they are looking for a way to internationalise the currency. Now, they were saying essentially that they wanted to segment it.

“For Southern Africa, South Africa is going to be the sort of a hub for the currency. So, they are going to be the focal point for the Chinese to make that available for trade in that area.

“In West Africa, they are looking for a hub. Ghana is interested in being the hub for the currency, to circulate it for those who want to use it. It is not compulsory. But Nigeria is a bigger country with bigger economy. So that does make sense.

“And they became a kind of attracted to Nigeria to be the hub.

“So, for us, the benefit is that it gives us small flexibility. So, if Nigeria is buying Chinese goods, for instance, it will in our interest to use the Yuan because we know there is a lot of squeeze for the dollar.

“But we still use the dollar. But if it not enough and there are some people who want to invest in the country, instead of crying that they cannot take dollar out, there might be Yaun that they would be happy to take out because it is now internationalized as a currency and they can use it. So, it gives us a much larger option.

“As you know, a lot of importers now are complaining that they are not able to access the dollars to buy good and things like that. So, if we have in addition to dollar, we have Yaun, then they can also have that available.

“So, it has given us a greater opportunity for our economy so that those people can also now import not withstanding the shortage of dollars.

“So, that is really what it’s more about rather than a swap deal or any such thing.” He stated