NewsRescue broke the news to Nigeria and our global readers on February 8th that Nigeria’s presidency was plotting to sack electoral commission chairman, Attahiru Jega and replace him with Governor Olusegun Mimiko of Ondo state’s brother, Professor Femi Mimiko. See: NewsRescue–INEC: Jonathan Plans To Replace Jega With Prof Olufemi Mimiko. This information which we got from our impeccable and immutable sources at the presidency has been proven to be absolutely accurate and before its time as “government media,” Vanguard just confirmed. See: Presidency shops for Jega’s replacement 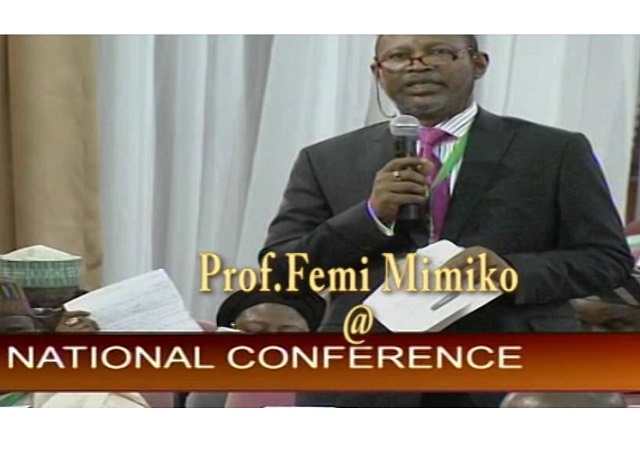 We are assured our readers are confident in the ground breaking work we do and the 99% accuracy of our RESCUED news.

The story we are breaking now is sensitive and delicate and we assure our readers that though we first received this intelligence on the same February 7th evening, the evening of the Military coup in Nigeria, along with the story on Mimiko as Jega’s replacement, we restrained ourselves due to the delicateness and sensitivity of the story.

We have since then vigorously verified its authenticity from our limited parallel secure sources.

This promise and assurance in addition to fears Dasuki has over billions in funds for security he has coveted and he knows the Buhari/Osinbajo authentic regime will investigate him for, is the powerful impetus behind his cooperation and indeed front stage role in orchestrating the coup of the 7th of February.

Sambo Dasuki’s family though heir to the throne is not the prominent family favored for the throne on most rotations.

Sambo Dasuki’s father we recollect, Sultan Ibrahim Dasuki was abruptly deposed from the seat by the Abacha government in 1996. This has not sat well with the Sambo family and NSA Sambo Dasuki holds vendetta against the state of Nigeria.

How Goodluck Jonathan will impose Dasuki on the post is to be imagined.

Sometimes Sultans are killed and sometimes they are fired as happened to Dasuki’s father.

The selection of the Sultan is ultimately done by the State government, but the presidency can sponsor and blackmail to impose its wishes, as the Jonathan government attempted in the Kano case. However it is said that president Goodluck Jonathan has determinedly promised Sambo Dasuki will soon inherit the throne currently occupied by Sultan Saadu Abubakar, son of Siddiq Abubakar III who inherited the throne from his elder brother, Muhammadu Maccido.

The Choice of Prison or Palace

Though they are sons of Uthman Danfodio, the Dasuki family is not a favorite for the throne in Sokoto and this could explain why the NSA can do anything to occupy the throne. Dasuki our links say, finds him self with two choices: jail and possible death under Buhari who he (Dasuki) arrested and vandalized his home including destroying his marriage as well as seized and destroyed his certificates in the 80s or Sultan under Jonathan.

Long life to the Sultan of Sokoto

Other Fears of Dasuki

There is a massive billion dollars corruption on defense contracts perpetuated by Sambo Dasuki under the guise of purchasing military equipment for the armed forces.

1. He purchased refurbished MI Helicopters as new for the Nigerian Airforce from Belarus at the cost of $84 million per one which the market value is $15 million two have already crashed and killed the pilots.

2.  He purchased a substandard UAV (Drones) from China at an exorbitant rate of  $260 million as against a brand new UAV which was offered to Nigeria by Elbit Systems of Israel who are the pioneers and leading UAV Manufacturers in the world at a lower cost of $16.5 million per one and the Chinese UAV crashed on its maiden flight at Mafa village in Borno State.

3.  He purchased and install a Command and Control Centre in his office from an Israeli company called NICE at an exorbitant price of $80 million which the market value is put at $15 million. His office is not an Operational Agency by law as it serves only as an advisory role to the Presidency on security and intelligence matters so he doesn’t need a Command and Control Centre and since its installation it has never worked.

4. He has done a deal with the Tchadian and Nigerien Governments to pay them cash to fight the Boko Haram on behalf of Nigeria which he collected huge amount of money and pay them peanuts.

These are the main reasons why Sambo Dasuki is scared stiff of Buhari’s Presidency and was also forced to play the psychopathic role he is playing now.

Stay tuned to NewsRescue where we do not allow any anti-state and anti-citizen secrets or cover-ups.

Send your information and questions to editor @ NewsRescue.com