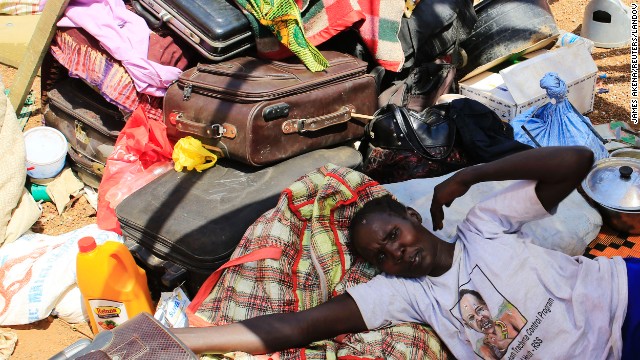 (CNN) — U.S. Marines stood by to help evacuate Americans in South Sudan as the top U.N. official there warned Tuesday of a “breakdown in respect for the most basic rights of people” amid the country’s widening military and humanitarian crisis.

U.N. Assistant Secretary-General Toby Lanzer tweeted that more accounts were reaching him of human rights abuses amid widening violence that has stoked fears of an all-out civil war in the world’s newest country.

“Mass extrajudicial killings, the targeting of individuals on the basis of their ethnicity and arbitrary detentions have been documented in recent days,” Pillay said, according to the statement. “We have discovered a mass grave in Bentiu, in Unity State, and there are reportedly at least two other mass graves in Juba.”

One U.N. official saw 14 bodies at the mass grave in Bentiu and another 20 on a nearby riverbank, said Ravina Shamdasani, a spokeswoman for the commissioner.

“As for the other two reported graves in Juba, we are still working to verify but it is very difficult, and there are reports that some bodies may have already been burned,” she said.

South Sudan’s breathtaking descent into widespread conflict comes a little more than two years after the nation was ushered into existence with help from international powers after decades of civil war between separatists in the oil-rich south and Sudan’s northern government.

Machar denied there was a coup attempt in an interview with CNN.

South Sudan has suffered from sporadic violence since its formation in 2011.

But the broad nature of this conflict and the intensity of the violence — which U.N. officials say has taken on ethnic overtones — has raised fears of another genocide along the lines of Rwanda, the African nation where 800,000 people were slaughtered in 1994, according to the United Nations.