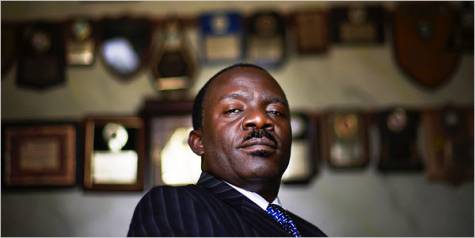 Nigeria’s leading human rights lawyer, Mr. Femi Falana, has served notice on President Muhammadu Buhari to effect the release of Shiite leader Sheikh Ibraheem El Zakzaky who has been in detention in Abuja since December 2015.

Mr. Falana, who served the notice in a letter personally addressed to Mr. Buhari, averred that the detention of the religious sect leader and his wife Hajia Ibraheema in the federal capital was illegal and unconstitutional.

The fiery Islamic preacher had been involved in a running battle with the Kaduna State government under which his area of operation, Zaria, falls, for decades before the battle reached its peak during the tenure of incumbent Governor Nasir Ahmad El Rufai who apparently vowed to rid the state of the cleric and his followers, employing all the instruments of state.

“In a considered judgment delivered on December 2, 2016 the Federal High Court declared the detention of our clients illegal and unconstitutional and ordered their release from the custody of the State Security Service within 45 days from the date of the judgment,” Mr. Falana said.

“The Federal Government was also ordered to provide a temporary accommodation for our clients on account of the unchallenged evidence that the Army and the Kaduna State government had burnt down and demolished their residence. Furthermore, the court awarded N50 million as reparations for the illegal arrest and detention of our clients,” he added.

Mr. Falana recalled that the Nigerian Army had on December 12, 2015 unleashed what it called unmitigated violence on the Shiites in Zaria under the pretext of a plot to assassinate the Chief of Army Staff, General Tukur Yusuf Buratai, and ended up massacring about 347 Shiites that included children during a dawn raid on their domain.

“Aided by the Kaduna State government, the Nigerian Army secretly buried the dead bodies of the victims in an unmarked grave without any autopsy whatsoever and the bereaved families are yet to be informed of the extrajudicial execution of their loved ones,” the Lagos lawyer further said in the letter.

Mr. Falana also averred that although El Zakzaky was not at the scene of the violent attack, the assailants invaded his residence at Zaria, set the house ablaze and killed three of his children before the Kaduna State government demolished the remnant of the residence to render the occupants homeless.

“El Zakzaky and his wife were later arrested by the Army and handed over to the State Security Service which took them to a detention center in Abuja where they have since been detained without any trial,” the letter further stated, stressing, “Owing to lack of medical attention in detention, El Zakzaky has lost his right eye.”

According to Mr. Falana, the bid by the authorities to cover up the atrocious activity had prevented the detained cleric from testifying before the Judicial Commission of Enquiry constituted by Governor El Rufai to probe the incident.

“The Judicial Commission the Nigerian Army was unable to substantiate the monstrous allegation that the Shiites had planned to assassinate General Buratai,” the letter also stated.

Mr. Falana, who stressed the collusion between the Kaduna State government and the Nigerian Army in the treatment meted to El Zakzaky, expressed dismay that the cleric was still held in detention without regard to a Federal High Court ruling which ordered his release.

“Although the Federal Government claims to operate under the Rule of Law, it has treated the said orders of the Federal High Court with contempt while some public officers have contemptuously justified the continued detention of our clients without any legal basis whatsoever,” he lamented.

In a direct address to President Buhari in the letter, Mr. Falana said: “Should Your Excellency refuse to ensure compliance with the said orders of the Federal High Court, we shall be compelled to embark on contempt proceedings against the Attorney-General and Minister of Justice as well as the Director-General of State Security Service. If the military personnel indicted by the Judicial Commission of Enquiry are not prosecuted we shall request the Special Prosecutor of the ICC to put then on trial for crimes against humanity.”

He, however, appealed to the president to exploit the cleric’s unjust detention to demonstrate his administration’s avowed commitment to stamping out impunity from governance.

“We also pray Your Excellency to direct the Nigerian Army to investigate and prosecute the military personnel responsible for the brutal murder of 347 members of the Shia Community at Zaria in December 2015,” the letter pleaded.

A 1979 First Class Economics graduate of the Ahmadu Bello University in Zaria, Sheikh Ibraheem El Zakzaky has been a thorn in the flesh of various administrations in Kaduna State, the more for the fact that his education and exposure have ensured he could not be intimidated by successive governors of the northern state notorious for religious extremism which usually snowballs to violent clashes that claim lives.