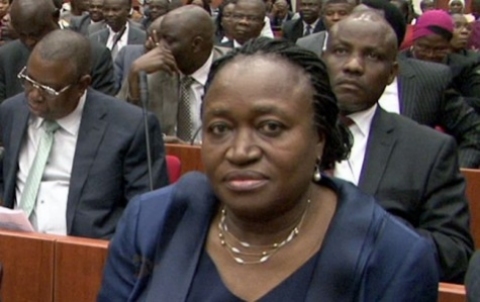 Even though the CBN governor and the bank’s deputy governors were indicted and recommended for sack, the president moved against Mr. Sanusi alone.

The Central Bank’s new acting governor, Sarah Alade, and all of the bank’s deputy governors took part in the alleged squandering of billions of naira at the bank, and should be fired alongside the bank’s governor, Lamido Sanusi, the Financial Reporting Council’s recommendations, on which President Goodluck Jonathan based his suspension of Mr. Sanusi, has said.

But regardless of an outpouring of reactions to his suspension – which many Nigerians believe is linked more to his exposing government corruption – Mr. Jonathan will not sack all the indicted deputy governors at a go, and may even spare them, a senior aide to the president told PREMIUM TIMES Saturday.

The government is accusing the CBN, under Mr. Sanusi, of financial recklessness, but many Nigerians believe the governor is being punished for accusing state oil company, the Nigerian National Petroleum Corporation of diverting as mush as $20 billion of the country’s oil revenues.

The government’s verdict is based on the recommendations of the Financial Reporting Council of Nigeria, a little-known government agency under the supervision of the Federal Ministry of Trade and Investment.

The FRC is responsible for, among other things, developing and publishing accounting and financial reporting standards to be observed in the preparation of financial statements of public entities in Nigeria.

Until its report was cited as the basis for axing the CBN governor, the council was not known to have blown the whistle on corrupt government agencies and individuals.

In paragraph 2g of its report, the FRC urged President Jonathan to exercise his powers and “cause the Governor (of CBN) and the Deputy Governors to cease from holding office in the CBN.”

The council, headed by Jim Obazee, rejected the explanations by the CBN to its initial report, and termed the responses “a clear display of incompetence, nonchalance, fraud, wastefulness, abuse of due process and deliberate efforts to misrepresent facts on the part of the leadership of the CBN.”

Mr. Sanusi has denied wrongdoing and plans to challenge the suspension order in court. Analysts say his removal has stirred anxiety in the nation’s markets.

Many Nigerians accuse the government of instigating the FRC to target Mr. Sanusi and then dusting up a report released several months back, only after the chief accused, Mr. Sanusi, opened up to the world how at least $20 billion of oil proceeds were either stolen, or diverted by government officials.

The allegation that the Nigerian National Petroleum Corporation, NNPC, has failed to pay the huge sum in government treasury, has refused to go away. Despite the government’s denial, it has failed to account for the money, which is more than half of the nation’s entire budget for a year.

Mr. Sanusi, whose evidence is helping the Senate Finance Committee investigate the allegation, was suspended on Thursday morning as the committee prepared for its final public hearing into the missing money at about 2 p.m that day.

The FRC said the CBN governor himself, and all of the bank’s deputy governors including Mrs. Alade, have their own share of the blame in the alleged financial malfeasance in the bank and should be sacked and prosecuted.

The council said the bank lied in its audit report to deceive the uninformed, and described the CBN financial statements as “highly abridged with poor disclosures of transactions and events”.
According to the council, a key evidence of the bank’s management attempt to conceal the truth from government was its handling of the Asset Management Company of Nigeria, AMCON.

The CBN is the part owners of AMCON. The council noted that though the CBN has directors representing it on the Board of AMCON, and was aware of a loss after tax of about N2.439 trillion and negative total equity of N2.345 trillion at the end of 2011, yet it failed to disclose to the president details of the maturity date of the sovereign instruments.

Besides, the Council also indicted the CBN for failing to advise the government on the dire negative implications its inability to fulfil its obligations in the AMCON’s sovereign bonds would have on the country’s credit risk rating.

Justifying the need for detailed investigation of all allegations of financial infractions levelled against the management, the council said a thorough investigation “cannot be successfully done if the principal officers (the Governor and his Deputy Governors) are allowed to be in office.”

Contacted Saturday on why the President has not fired the indicted deputy governors, the Special Adviser to the President on Media and Communications, Reuben Abati, said the government is at liberty to determine how to implement the recommendations of the Financial Reporting Council.

“It is not practicable to dissolve the Central Bank at a go,” Mr. Abati said. “Investigations are ongoing and once people believed to more culpable are identified, government will act appropriately.”