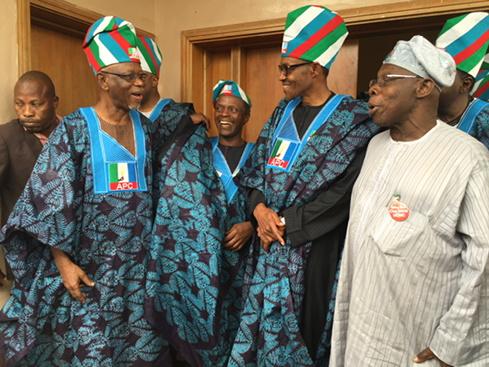 In 2013, General Muhammadu Buhari was interviewed on his thoughts on the reason Boko Haram terror came into being and on the declaration of the state of emergency.

The statements made by the General, some of which have been distorted for rebroadcast as is typically done by the tactless ruling party, have today been proven very accurate.

What General Buhari Said in 2013

Terrorists should be prosecuted in court and not killed extra-judicially: The General said that the reason Boko Haram terror spun out of hand and became the deadly menace it was, was because of the treatment of the initial group led by Muhammad Yusuf. The General pointed out about the Muhammad Yusuf group which had not yet assumed the ridiculously deadly nature the new Abubakar Shekau Boko Haram II group, that when that sect arose, the Nigerian government extra judicially killed everyone and demolished their homes.

This was criminal on the part of the government as those captured including the sect leader should have been brought to trial.

Many suspect that the reason the sect leader was killed under the government of Borno governor Modu Sheriff, was to bury evidence as it was expected that Muhammad Yusuf will implicate the governor and other ANPP party members like Mala Othman. These things were meant to be investigated with a proper “code of conduct” as Buhari called it and not criminally submerged as the Yar-Adua-Jonathan government attempted to, which led to the current out-of-control terror menace..

In the General’s words, killing Yusuf extra-judicially and killing his family members too while confiscating their property provoked the out-of-control crises Nigeria would later suffer. He was right. 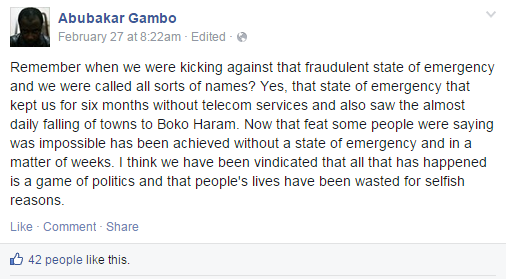 General Muhammadu Buhari has again been proven right after the the Nigerian senate refused to extend the state of emergencies and now the Jonathan government has shown that the terrorists can be defeated in just a month with responsible army deployment. Nigerians had witnessed through out the 6 years of Boko Haram unlimited terror that the terrorists were cowards, easily defeated by the Civilian-JTF armed with sticks, stones and dane guns. The military during that period had been told to stand down by the Jonathan presidency. He was right.

What General Buhari did not say

Unlike the slanderous statements published and redistributed by the PDP, the General never said that ‘declaring a war against Boko Haram was declaring a war against the north.” As shown above, his statements were in opposition to the state of emergency and not to the war. Nigerians are used to all levels of purposeful misquotes and slanderous distortions of the General’s statements; this is the only tactic the ruling party has been investing billions of naira in as its sole campaign strategy. 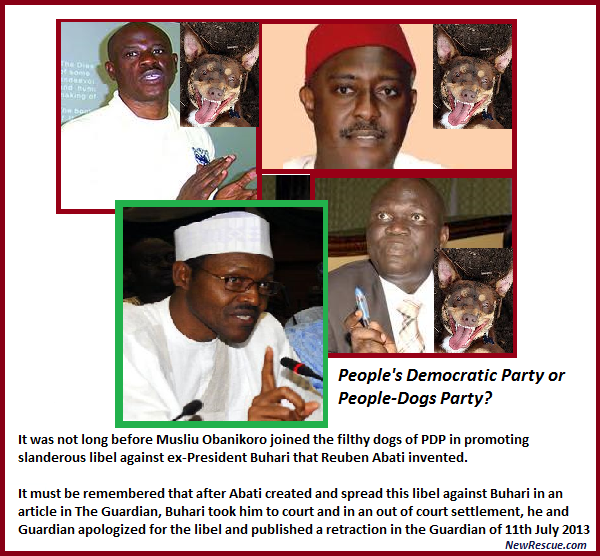 Buhari did not say that Shekau should be flown to Abuja or should have any amnesty of any sort. Buhari’s statements only refred to the initial Boko Haram I under Mohammed Yusuf. It was in reference to this group at the initiation of the terror that Buhari said the members should have been treated in accordance with the constitution and not extra-judicially murdered with heir property confiscated by the government. Though this position is debatable, a fact finding mission did indeed find the Nigerian government guilty in those murders and the family members of the Boko Haram I leadership were to be compensated. It is their usual lies.

Read The Full Buhari Release from May 2013

General Buhari  who kicked against the emergency rule imposed in Borno, Yobe and Admamawa said President Goodluck Jonathan should resign from office for his inability to tackle the security challenges facing the country.

“Jonathan should vacate and give way to competent hand to govern the country”, he said.

Speaking to newsmen in his residence in Daura town yesterday, General Buhari said the issue of security is a fundamental duty of any responsible government, but Jonathan failed to protect the lives and the properties of Nigerians since he assumed power.

“When the Niger Delta militants started their activities in the South-South, they were invited by the late President Umaru Yar’adua.

An aircraft was sent to them and their leaders met with the late President in Aso Rock and discussed issues. They were given money and a training scheme was introduced for their members. But when the Boko Haram emerged in the north members of the sect were killed,” General Buhari lamented.

“And when the police failed to address the insurgency, soldiers were invited and they captured the Boko Haram leader, Muhammad Yusuf alive and handed him over to police. But Yusuf was eventually killed, his in-law too was killed and their houses were demolished”, he said.

He said the murder of the Boko Haram leader however provoked his followers and that was what led the country to its present situation. He suggested that government should adopt a new approach that will end the insurgency without affecting the lives and properties of innocent people.

“In Bama and Baga towns, military personnel were reported to have been engaged in extortion and sometimes Molesting of women. And because a soldier was killed in Baga the whole town was sacked by military. This is not the best way military should have acted when they were sent to restore law and order in a town. How can a responsible government allow its people to be killed in this way,” he asked.

He warned that the police, SSS, army, navy and Air force should know how to conduct themselves and act professionally.

“The soldiers are not expected to go and sack a town because one of them is killed. They are expected to capture the culprits for prosecution.

After all the soldiers are not meant to tackle internal crisis but when it is necessary they should act professionally.

“Whoever is sent to protect people should also protect their integrity.

When the former England’s Prime Minister, Margret Thatcher decided to hold its political meeting in Brighton the security advised her to cancel the meeting because of the IRN rebellions, but she insisted and held the meeting. The hotel she was accommodated was bombed and some of her political associates were killed but soldiers did not condone the area and kill everybody there, rather they conducted themselves professionally,”
Buhari said.

“Government cannot kill all the Boko Haram members. Government should rather arrest and prosecute the Boko Haram members. They should only be killed when they said clearly they wage war against their country like what happened during the civil war. And even during civil war we that fought in the war were given a copy of code of conduct book which guided us against killing innocent people”, he said. –PBL