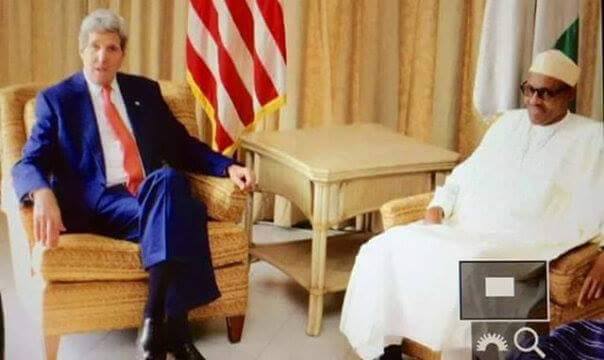 New details are emerging as to the conversation US Secretary of state, John Kerry had with Nigeria’s leading opposition candidate, General Muhammadu Buhari in Lagos over the weekend.

Kerry had said US president Obama was worried about the terrible proliferation of Boko Haram terror across West Africa from Nigeria and destabilisation of the region.

President Buhari had told him that the usurping of billions of dollars for the military was a chief reason the Jonathan government could simply never fight Boko Haram meaningfully. He further stated that the army was undermined and lacking the right equipment to maintain morale and efficiency to combat Boko Haram the former president further exposed that the Jonathan government disrupted panels where the security chiefs were invited so as to avoid senate prying into unaccounted-for military billions.

Punch has a full story on this.