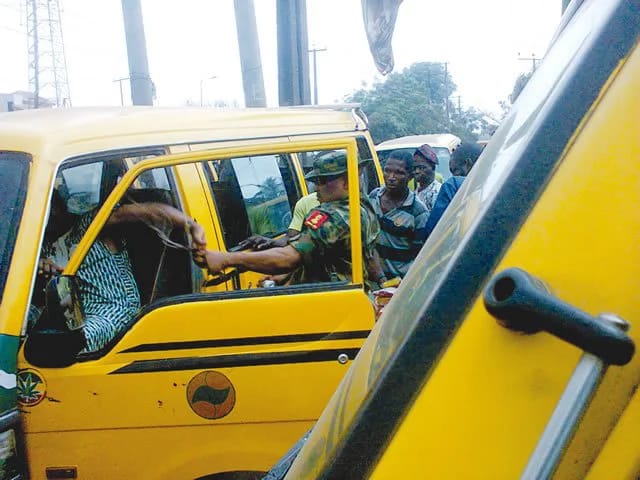 A Nigerian soldier simply identified as Emmanuel B J, reportedly battered one Moshood Olaniyi, a bus driver on Wednesday, February 17.

PUNCH reports that Olaniyi was brutalised at the Ojodu-Berger motor park, for allegedly sneering at the soldier. The soldier pounced on Olaniyi and thrashed him with horse whip before he used his fists to punch him.

A crowd gathered an begged the Soldier to leave the bus driver alone, he however ignored their pleas.

When the crowd urged the soldier to state the driver’s offence, Emmanuel B J only slapped Olaniyi again for more than 12 times. He said, ”Who does he think he is? I will kill him and nobody will query me. I have killed many people who are older than this idiot (Olaniyi) in the past and nobody queried me for that.

”The idiot attempted to hit me while reversing his vehicle and when I asked him why, he just sneered at me. If at all he is older than me, I don’t care. I will do to him what he will never forget for the rest of his life”.

Emmanuel reportedly dragged Olaniyi to the park of commercial motorcycle operators, a distance of about 50 metres, before he released him after much pleading that lasted for about 45 minutes.

Reacting to the alleged assault, the spokesperson for 82 Division, Nigerian Army, Lagos, Col Kingsley Samuel said he was yet to confirm the identity of the soldier, but promised to investigate the assault.