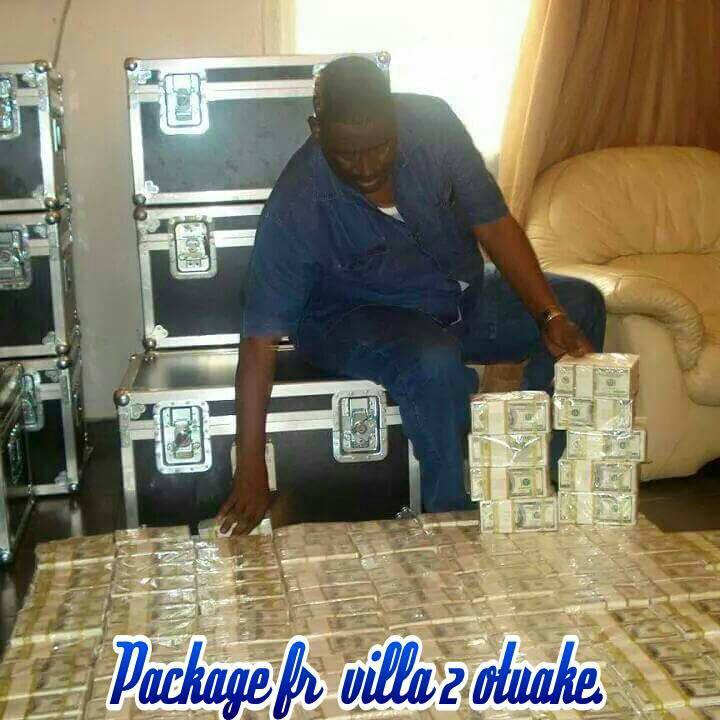 This image branded, ‘carting dollars to Otueke’ has a man who bears semblance to Nigeria’s outgoing president, packing what is estimated to be millions of dollars cash in new notes direct from Nigeria’s Central bank under the governorship of Godwin Emefiele from Zenith bank.

The identity of the man with the stash cannot be made out with accuracy, however sources say if he is not Jonathan he is one of the outgoing PDP presidency’s agents

The same boxes were used to unsuccessfully smuggle $15.6 million dollars to South Africa last year in a friend of the president and the nation’s Christian association president’s private jet.

At least eight of the transport cases are seen behind the man as far as the picture captured, for an estimated 8 million dollars minimum. It could well be tens of millions of mint CBN dollars in the villa.

Nigeria’s CBN governor, Godwin Emefiele has initiated brutal new regulations on the masses for economic issues with the Nigeria caused rather by this stashing of dollars released with the CBN governors authorization, which has destroyed Nigeria’s economy.