A senator alleged yesterday that President Goodluck Jonathan had been secretly plotting to avoid election and extend his tenure by two years on the grounds that Nigeria is at war.

Ojudu made the revelation while addressing the ARG gathering inside the Trenchard Hall of the University of Ibadan with the theme “The change Yoruba will vote for.”
Also, a top political source yesterday in Abuja corroborated Senator Ojudu’s allegation, saying President Jonathan may shortly declare Nigeria to be in a state of war and seek extension of tenures of current elected public officials for another six months.

However, the Presidency did not respond to request by Daily Trust for comment on the allegation.

Jonathan’s spokesman Reuben Abati, Public Affairs aide Doyin Okupe and Political Adviser Rufai Alkali neither answered several phone calls made to them nor replied text messages.
Senator Ojudu, in his submission, said: “If anybody thinks there is going to be elections on March 28, the person is deceiving himself.  All the people that are close to me, especially my friends, I told them a year ago that there would not be election and that they are just deceiving us.

“Some of us who are perceptive have seen this in the body language of our colleagues; the body language of the Senate President himself, David Mark. When we came back from the summer recess last year, he said that for him, it’s not time for election.  We should not be thinking of elections now, rather we should be thinking of fighting Boko Haram. The moment we took him up on that, he reversed himself.

“There are conscious attempts at lobbying some of us to work against having elections. Therefore, where they have got to now is the preliminary stage.

“We will resume next week Tuesday. I can assure you, they may likely bring a motion asking us to adjourn or postpone the elections for six months because there is an ongoing war.

“The constitution allows this. The constitution states that where and when there is a war in any corner of the country, the President can bring a motion to the National Assembly to postpone the elections for six months in the first instance and this can be passed by just a simple majority.

“If you think at this time they may not get simple majority, you may be wrong. This is because 80 per cent of the senators and House of Representatives members are not returning, not out of choice. Perhaps, I am the only person who is not returning out of choice in the entire National Assembly. All others attempted but they did not make it.

“This may surprise you, we are all broke. If they say we want to give you two more years as it is being quietly requested by Jonathan, virtually everybody will vote for that.”

He said Jonathan had been pleading that the National Assembly should allow him to continue for two more years because he feared that if the election holds and a northern Muslim wins, there may be problems in the Niger Delta.

He added that Jonathan also argued that if he wins there would be problem in the north.

“Therefore, the solution is for him to do two more years and at the end … you can have northern-northern and Muslim-Muslim candidates.

“That is their logic and that is what they are working towards. Left to us, they know it shall not pass. We must have to start crying out now and be strategic in our planning,” he said.

“We are about entering into a very long night in Nigeria. It is a very sad thing that whenever we thought we have made a progress, we take ten steps backward. This is what is happening now.”

Daily Trust heard that plans had been concluded to present the request to the National Assembly ahead of members’ resumption next Tuesday.

“We have been told that the president will forward the request to us in the National Assembly in which he will declare that Nigeria is now in a state of war as foreign troops under the multinational joint forces of the African Union are now in Nigeria,” the source said.

“The presence of the foreign troops must be backed by appropriate legal instrument and that is why the relevant constitutional provisions must be invoked,” the source said.

The president, sources said, will request the National Assembly to approve the six months tenure extension in accordance with the provisions of the constitution which allow for elongation of tenure of political office holders if the nation is in a state of war.

A source in the legislature told Daily Trust that already, “monies have been made available to induce lawmakers into approving the request. Again, they know that 65 percent of the National

Assembly members do not have return tickets and many of us may be willing to approve the extension,” the source who is ranking lawmaker said.

Daily Trust gathered that the initial six months extension would be used as a smokescreen for subsequent extensions as the president will request for three more extensions to make it two years.

When contacted, Chairman of the Senate Committee on Rules and Business Senator Ita Enang declined to comment saying “I am not aware of it and I won’t talk about what is not before us.”

However, Senator Mohammed Ali Ndume (APC, Borno) said any such request must be approved by 2/3rd majority of each chamber of the National Assembly and “as far as I am concerned, it

Interim government as plan B
Another source said if the tenure extension plot fails the Presidency would resort to “Plan B”.

He said this entails setting up an interim government to be headed by a former Nigerian leader or an ex security chief.

Sources said the idea of handing over to an interim government is the last card to be played by the presidency as hopes for the president’s re-election keeps dwindling.

Daily Trust gathered  that the postponement of the polls to March 28 and April 11 was meant to stretch the time to the minimum 30 days to May 29th as stipulated by the constitution so that any further delay would make it difficult if not impossible to hold elections.

Daily Trust also gathered that the security forces may not be able to contain the Boko Haram insurgents within the next six weeks as they requested but that the crisis may take a different and more dangerous dimension thereby creating chaos or even anarchy in the north.

This scenario, according to those familiar with the plot, would be orchestrated to make it impossible for the election to take place within the constitutionally stipulated period of time. 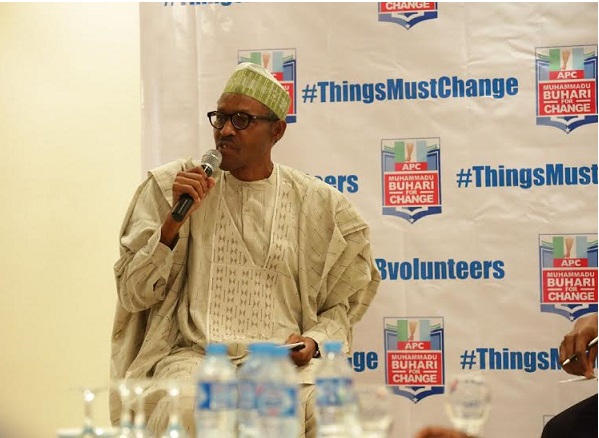 Presidential candidate of the All Progressives Congress (APC) retired General Muhammadu Buhari has urged President Jonathan to speak up on the alleged plan to impose an interim government in the country.

Buhari decried the “embedded vested interest and sinister motives behind the polls postponement” asking Jonathan and his party (PDP) “to come clean on the wave of negative speculations in the public domain, to avert unrest and possible civil disobedience that could scuttle our hard-earned democracy.”

Speaking through his campaign spokesperson Malam Garba Shehu, the APC flag bearer frowned at the unholy alliance between the Jonathan government, the PDP and the military for the purposes of subverting the rescheduled elections.

He said civilised and democratic people around the world believe that the security excuse used by “this unpopular government to prolong the polls is untrue and pretentious.”
He wondered what type of democracy allows compromising security chiefs to determine when elections would hold or not.

“Now, the National Security Adviser (NSA) has become the megaphone for this government. He went to Chatham House in the UK to call for election postponement which he has now obtained.

“Next, he claims he would crush Boko Haram within six weeks. What if he can’t, will there be a further excuse to extend the elections and create constitutional impasse? Nigerians are no fools and nobody can pull soiled cotton over our eyes anymore,” he said.

Buhari added: “We are inundated with information as to how this government wants to tamper with due process by discrediting INEC and even sack its chairman, raise false alarms, rig the election with military connivance and eventually scuttle democracy, replacing it with an interim government.

“President Jonathan must come clean on these allegations. He is the Commander-in-Chief, and not the NSA. Hence he must, as a matter of urgency, speak to the nation and the world on these salient allegations. A refusal would make him the historic President who doesn’t give a damn while on national assignment.”