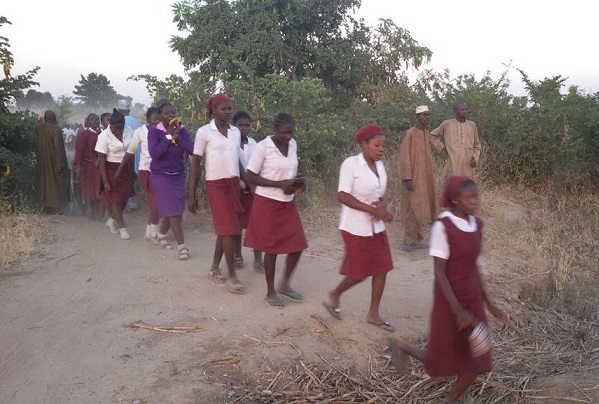 A civil rights worker in Nigeria’s restive northeast organised the dramatic rescue of nearly 500 schoolgirls from a town under attack by Boko Haram.

He has been credited with averting a repeat of the abduction, in April last year, of 279 students from the town of Chibok, most of whom are still missing.

Ibrahim Garuba Wala, better known as I G Wala, a leader of Nigeria’s National Consensus Movement(NCM) arranged for the daring evacuation of the children from deep in the bush, where they had fled with their teachers.

His rescue operation was conducted under the noses of the Nigerian military, which had reportedly refused to enter the area because it was too dangerous.

The incident happened two months ago, but has remained virtually unreported, even in Nigeria. I G Wala has provided photographs and video of the rescue, showing the 470 girls, all wearing school uniforms, running in single-file through dusty terrain, many barefoot. Liaising with their teachers, who had alerted the NCM leader to their plight by mobile phone, I G Wala agreed a rendezvous point near a remote village accessible by road. He hurriedly arranged a fleet of passenger vans from the state capital, Gombe, 50km away, which whisked the girls to safety.

They had been boarding at the Federal Government College in Bajoga town, which had come under fierce attack by the jihadi insurgents, who entered the town in stolen Armoured Personnel Carriers. They attacked the police station, robbed the bank and looted shops.

A heavy gunfight ensued between the insurgents and the Bajoga police, alongside a few dozen soldiers based near the town. An unknown number of militants, police and military personnel were reportedly killed.

As the Boko Haram fighters entered the school compound, I G Wala was on the phone to a member of staff at the school. “I could hear the teachers screaming at the girls just to drop everything and run. All I could think of was the girls from Chibok and I knew that we could not let this happen again,” he said. I G Wala has been an active member of the Bring Back Our Girls campaign.

He claims he begged a Nigerian military commander to send in his troops to rescue the school girls but was told that the situation there was out of control. When I G Wala insisted on leading a group of civilians to rescue the girls, the commander, he says, agreed to supply two military escort vehicles.

Pictures show a handful of armed soldiers observing the evacuation. From where the road ended, the rescuers had to continue into the bush using motorcycles borrowed from villagers.

She ran up to me, crying, and hugged me. I told her and her friends not to worry and that everything would be OK now. You should have seen their faces

The civil rights worker took with him the speaker of the Gombe State Assembly, Inuwa Garba, who has confirmed the entire account to Channel 4 News.

Mr Garba said military aircraft were bombing Boko Haram positions in the bush which is why the army commander had been reluctant to let the civilian rescue party enter the area.

While travelling by motorcycle, a preferred mode of transport for Boko Haram, they had to fly white flags so that military pilots above would not bomb them. The girls ran a total of 15km through the bush. They had been unable to take any water and many were severely dehydrated, I G Wala said. One had been injured by treading on a spike with bare feet.

“We carried some of them on our backs for the final kilometre back to the nearest village, which was as far as our vans had been able go. We had brought with us a vehicle loaded with bottles of water for the girls.”

The children and their teachers emerged from the bush at dusk. The area was extremely insecure and “we had to get out quickly,” he said. The girls were driven to the Government Girls’ Secondary School in Gombe city.

One of the students was I G Wala’s own niece, 13-year-old Miriam Mohammad Garuba Wala.

“When she saw me, she cried out ‘Uncle!'” he said. “She ran up to me, crying, and hugged me. I told her and her friends not to worry and that everything would be OK now. You should have seen their faces,” he said. “They were distraught.”

“When we finally arrived in Gombe, we were met by teachers and many parents of the girls from Bajoga. There was nothing quite like that feeling. It was very emotional,” said I G Wala. The militants have led sustained attacks in the Gombe area in recent weeks. Ten days ago, a car bomb exploded 200m from a stadium in Gombe city, just minutes after President Goodluck Jonathanhad left a political rally there. The bomb killed at least one bystander and wounded seven. The previous day, a suicide bomber killed five and wounded eight near a mosque in the city.

Boko Haram, an Islamist group which has affiliated itself with Islamic State and has established a self-declared caliphate across northeastern Nigeria. The group’s name roughly translates as “Western Education is Forbidden.” It has repeatedly attacked schools and abducted children. Those who have escaped say they are used by the insurgents as porters for weapons, as cooks and sex slaves.

In February last year, the insurgents killed 59 boys at the Federal Government College of Buni Yadi in Yobe State. One month ago, an attack on a boy’s school in Potiskum, also in Yobe State, killed nearly 50, when a suicide bomber, dressed in school uniform, detonated his vest during morning assembly.

I G Wala’s civil rights organisation, the National Concensus Movement, is a coalition of youth groups across northern Nigeria. It agitates against “the gross insensitivity of the Federal Government of Nigeria,” towards those who have suffered “unimaginable atrocities and calamities.”

I G Wala said he had received no word of thanks or even acknowledgement from the Nigerian federal authorities or the military, only from the principal of the school in Bajoga. He has remained friends, he said, with the ten soldiers “who shared this ordeal” and escorted his rescue convoy.

The girls of the Federal Government College in Bajoga are now back at school. There is now a heavy military presence in the town. The day after the girls were rescued, the Nigerian military is understood to have deployed reinforcements to Bajoga town but the convoy was reportedly ambushed by the insurgents and 28 soldiers were killed.