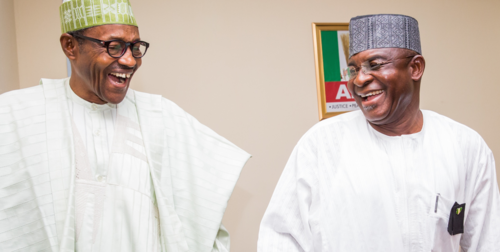 Comrade Daniel Onjeh of the All Progressive Congress (APC) who this month lost the Benue South Senatorial District to Senate President David Mark of the Peoples Democratic Party (PDP), says Mark’s visit to President-Elect General Muhammadu Buhari on Thursday as being inconsequential to the dispute in the race.

“This visit cannot subvert or change the cause of justice,” he said in a press statement.  “I won the election fair and square and I am confident of reclaiming my mandate at the Tribunal.”

He said of the reception accorded the outgoing Senate President that General Buhari was only demonstrating the strong virtues of a leader in receiving Mark  as the Senate President rather than on what he called Mark’s yet-to-be-sworn-in “stolen mandate” of Benue South.

He further stated that sincerity was lacking in the visit to the President-Elect.

He pointed out that while he was campaigning vigorously for Buhari’s election, Mark himself was campaigning on frivolities rather than issues, using religion to deceive the people of Benue South.  He noted in that connection that it was in Mark’s presence at one of the PDP rallies in Benue South that Governor Gabriel Suswam accused Buhari of being a Muslim fanatic and Boko Haram sponsor, without the Senate President cautioning the Governor.

“Mark is the greatest enemy of democracy yet its greatest beneficiary,” Onjeh said.  “He has been severally fingered in the annulment of the June, 12, 1993, election yet he is the highest beneficiary, serving as Senate President for an unprecedented eight [8] years. He is also an enemy of the masses. As a Communication Minister, he said telephone was not meant for the poor.”

He stressed that whatever Mark’s permutations are, he will fail woefully this time around.

Onjeh has declared the polls which led to Mark’s victory as having been marred by irregularities, ballot snatching and manipulation of figures, specifically calling for cancellation of the contest in Agatu and Otukpo Local Government Areas.  According to him, no accreditation of voters was even done in Agatu, but Mark was declared the winner there.