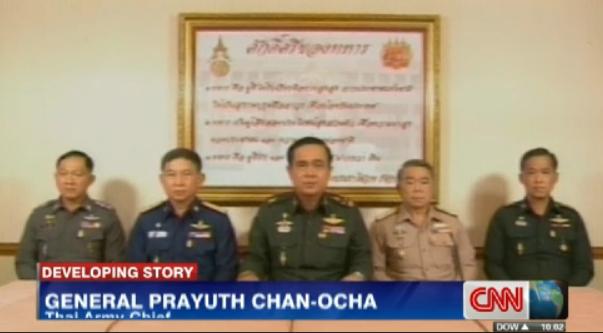 Thailand’s military has announced it is taking control of the government and has suspended the constitution.

The cabinet has been told to report to the military, TV broadcasting is suspended and political gatherings are banned. A nationwide curfew will operate from 22:00 to 05:00 local time.

The coup follows months of political turmoil in Thailand.

Bangkok, Thailand (CNN) — The Thai military on Friday tightened its grip on the politically unstable Southeast Asian nation, banning more than 150 prominent figures from leaving the country and threatening to arrest politicians who disobey its orders.

On Tuesday the army imposed martial law. Talks were then held between the main political factions, but the army announced the coup on Thursday.

Key political figures, including opposition protest leader Suthep Thaugsuban and pro-government protest leader Jatuporn Prompan, were taken away from the talks venue after troops sealed off the area.

Troops fired into the air to disperse a pro-government protest camp on the outskirts of Bangkok but there are no reports of major violence.

The broadcast media have been told to suspend all normal programming.

Thailand has faced a power struggle since Ms Yingluck’s brother, Thaksin Shinawatra, was ousted by the military as prime minister in 2006.

Correspondents say they are hated by an urban and middle-class elite who accuse them of corruption.