Faced with impending defeat, the Nigerian government today forced the “Independent” National Electoral Commission, INEC to reschedule the 14th February set presidential elections which the opposition candidates, former General Muhammadu Buhari and Vice contestant, Attorney Yemi Osinbajo were favored by odds of 4:1 to win according to most public polls.

The elections have been postponed from February 14th and 28th to March 28th and April 11th for the presidential and gubernatorial respectively; with dates subject to ratification.

The postponement announcement today which was preceded by heavy military presence around state capitals, followed a desperate hurdle by the ruling Peoples Democratic Party, PDP which saw various threats being thrown at the Electoral commission.

Electoral officers were reportedly bribed and threatened at gun point to sign their resignation letters.

17 political parties of 28 demanded poll shifts. Only the ruling PDP and main opposition APC had chances at the presidency. Reports had suggested the ruling PDP party bribed many of these parties to back its date shift.

The nation’s embattled and highly corrupt Minister of petroleum, Diezani Alison-Madueke has been said to be behind much of the desperate push to post-pone the elections to hopefully over turn the odds of ruling party defeat.

“It is  a gamble they rather take, ” Yomi Ajua a trader from Oyo said, describing the convoluted polity. “It is a very sad day for democracy and Nigeria’s progress.”

Musa Azare a public commentator said on faceBook, “Election Postponement: Any public officer who comes out in the open and declare that he/she cannot perform his/her constitutional duty should immediately resign. He/she has no business being a public officer.”

The government threats to the Independent commission were also openly backed by government allied terrorist group patron threats for the Chairman of the Electoral commission, Professor Attahiru Jega to be arrested.

Other government affiliated terrorist threatened the INEC Chair that they will block elections in their areas of the nation’s south.

Finally after an eleventh hour summoned council meeting of past presidents and political parties failed to deliver the postponement desired by the president, Goodluck Jonathan, the Army was called in to force INEC.

On Saturday, Press released statements by the Army chiefs declaring that they will not commit any soldiers to safeguard any election polls anywhere in the entire nation. Thus the INEC was left no choice but to buckle tot he desires of embattled president Goodluck Jonathan who is assuming more of a dictator posture as described by observers.

Images below show the resignation of INEC Chairman, Attahiru Jega who would not be able to conduct the elections with the Army is directed by the president not to cooperate.

Citing the security issue threats by the Nigerian Army, the Electoral commission announced that the elections will be postponed to March 28th for the presidential and National Assembly, and April 11th for the governorship abd House elections.

According to the government, the postponement is to permit the Multi National Joint task force to recapture territory conquered by Boko Haram terrorist group in the northeast of the nation. 14 of 700 local governments are under occupation according to National Security Adviser, Sambo Dasuki who has become unusually vocal as the 4-year tenure ran to its close.

Protests are expected to continue however Nigeria is known to be a place where the brutal government always ultimately has its way and is never collapsed by protest or expelled by impeachment.

Protests in Abuja Today With IG Wala: See more on this story 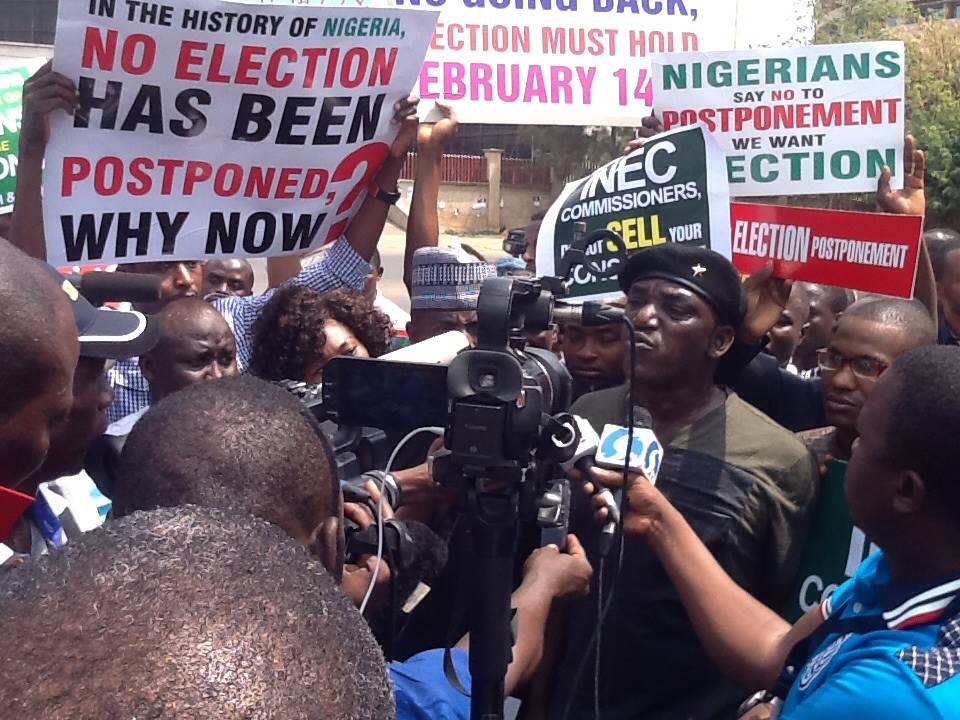 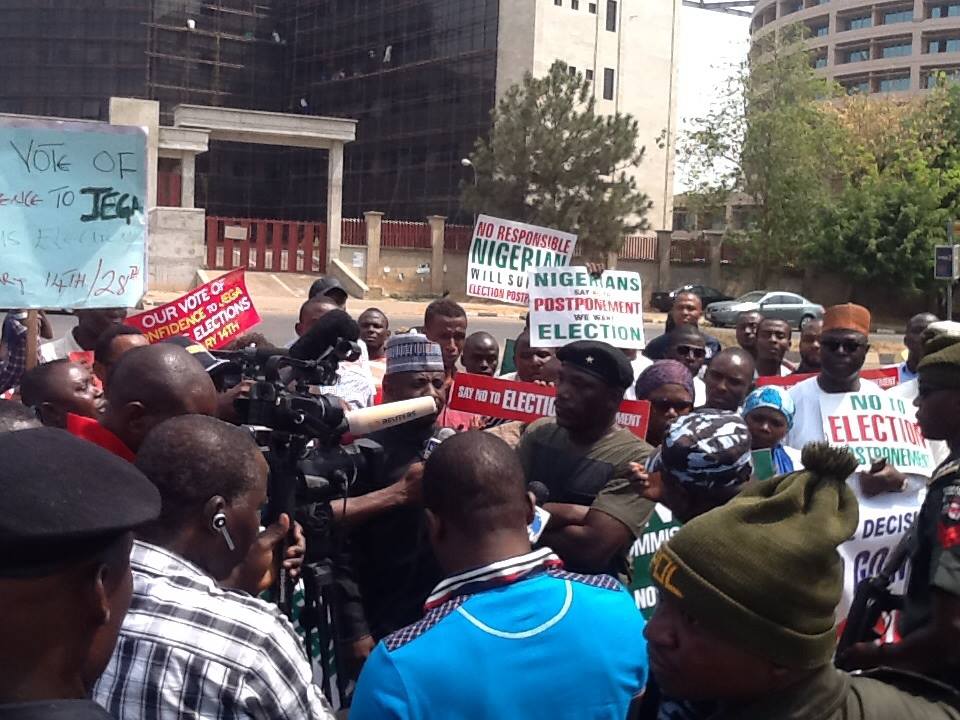 Why the Ruling PDP Desperately Wanted The Postponement

The postponement was desired by the ruling party for, among other reasons, the chances at improving its odds after the last minute engagement of its army in a serious push to crush the Boko Haram insurgency. The Jonathan government had for five years failed to take the crises serious as the insurgency was utilized as a political campaign tool, blamed on the opposition. However as new details came to fore including the exposure of some alleged group sponsors including an ex- Army chief and an ex-governor and close ally of the president, the president had to suddenly within the last few months embark on a true mission against the terrorists.

Also, analysts say the ruling party is confident that the opposition’s funds will finish thanks to the postponement of the elections and this will weaken their strength while the ruling party with its unlimited access to state funds directly and through private cabal partners will easily continue to aggressively sponsor slander campaigns against the opposition for the duration of the extension, thus cutting at some of their support. 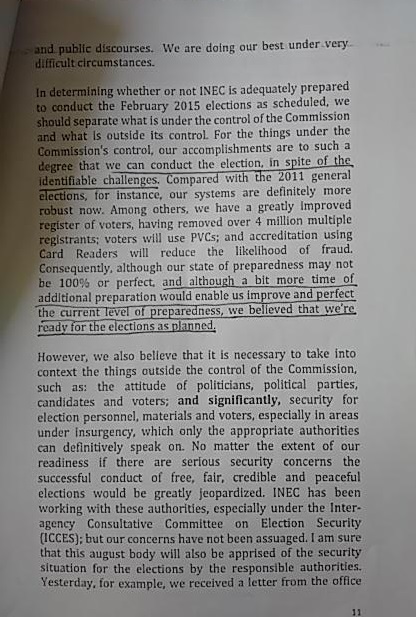 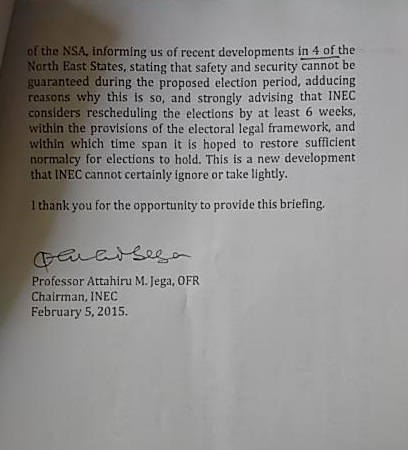 SaharaReporters has consistently reported that President Jonathan and his closest associates have been desperate to postpone the elections to enable them to re-strategize in the face of certain signs that Mr. Jonathan and his party were on the cusp of losing by a wide margin.

Once Mr. Jega makes it official that the elections will be postponed, Mr. Jonathan and members of his close-knit kitchen cabinet plan to intensify their plot to plant an interim government after successfully removing Mr. Jega as INEC chairman. Mr. Jega’s tenure is scheduled to end in June 2015.

Our sources reveal that the president and his team are exploring several options to ease Mr. Jega out of his INEC job. One option, according to a source embedded in the Presidency, is to ask the INEC chair to go on “termination leave” as early as the end of March, 2015. A second and more potent strategy is to launch a series of subterranean threats to his life and a series blackmail strategies,including the use of sections of the Nigerian media to accuse Mr. Jega of corruption in the award of INEC contracts.

SaharaReporters learnt that the heads of Nigeria’s security agencies, under direct instructions from the Presidency, categorically told Mr. Jega yesterday that they could not guarantee establishing a climate for free and fair elections to hold in February. They also reportedly warned Mr. Jega that they could not guarantee his personal safety and those of other INEC staff should elections go ahead on February 14th as currently scheduled.

The alarming pressure on Mr. Jega forced him to call a meeting of political parties, non-governmental organizations and resident electoral commissioners in Abuja today. Although the meetings are yet to end, Mr. Jega has confided in several people that he was open to considering a six-week postponement.

One of our sources said President Jonathan’s aides had bribed several briefcase political parties to go to INEC to demand a postponement of the elections.

The real agenda of President Jonathan’s inner circle is two-fold, according to information obtained from sources in the Presidency. The first is a desperate desire to get tenure extension at all cost through the backdoor. The second is to buy enough time to prepare the army to help rig the elections in favor of Mr. Jonathan should the incumbent president and the PDP continue to face bleak prospects in the polls.

Two sources at the Presidency disclosed that Petroleum Minister Diezani Alison-Madueke was particularly rattled at the prospect of Mr. Jonathan’s defeat. Ms. Alison-Madueke, who has engineered several shady deals in the oil sector that enabled her, Mr. Jonathan and a few cronies to pocket billions of dollars, is described of deeply scared of exposure and possible jail time should Mr. Jonathan lose the elections. The sources said the Petroleum Minister had persuaded Mr. Jonathan to sign off on her series of corrupt deals in the oil sector by arguing that the billions of dollars she was stealing would be used to guarantee re-election for the president. The minister used several fronts, including Jide Omokri, Kola Aluko, and Toye Cole in a series of questionable deals. One of her fronts, Mr. Aluko, who was also the minister’s lover, reportedly ran away with more than $2 billion dollars after a jealous Ms. Alison-Maduekebegan to hound him for dating former supermodel Naomi Campbell.

A source close to the Presidency also disclosed that Mr. Jonathan had struck a multibillion-dollar deal with Chadian President Idris Deby to outsource the fight against Boko Harm to Chad. With Chad now fighting Boko Haram on Nigerian territory, President Jonathan and his backers within the military would have enough troops to deploy to help rig the elections, said the source.

The president has already deployed soldiers massively into Lagos today to forestall any peaceful protests against the postponement of elections.