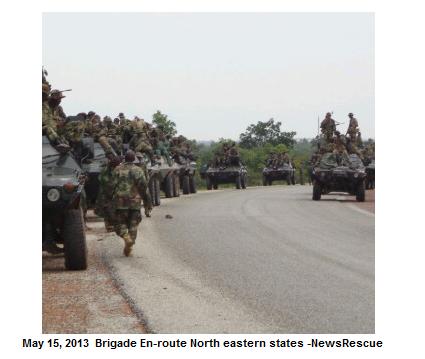 NewsRescue– The federal government is sending in an entire brigade of troops from its armed force to join ranks with the few troops who have been defending few local governments in southern Borno against the superior armed insurgent Boko Haram forces.

The president of the federation, Goodluck Jonathan announced the immediate draft of combat troops to support the engagement up north in his state of emergency address to the nation yesterday.

NewsRescue had on May 8th, published an extensive report detailing the need for urgent and immediate drafting of more troops to the embattled areas for meaningful defeat of the terrorist menace, as well as the institution of a state of emergency in these states, evacuation of citizens to temporary refugee centers and other emergency security updates. In our May 13th release, Nigeria: Top Level Sabotage Behind Military and Civilian Casualties in Boko Haram War – Military Sources [PART 1], we went further to describe what military sources could only describe as top level sabotage of the mission, with its being run with insufficient troops “to fail.”

A Brigade is a military formation consisting of 3-6 battalions. As NewsRescue reported May 13th, the JTF was asking for at least 2 battalions, but were offered only one company(an 8th of a battalion) by the CAS, General Azubuike Ikhejirika, whose tenure was extended – a first in Nigeria’s history, and is yet to visit the two attacked barracks’.

Boko Haram as we detailed and the president confirmed in his globally televised speech yesterday, have gained so much grounds, establishing their “government,” with the abolishing of public parastatals, institutions and “western” education schools in most northern local governments in the state. Our May 6th report, NewsRescue– Boko Haram: Nigeria Losing Borno, detailed the consequences of this reality and dared to ask if Nigeria should just cede Borno to this successful, un-countered insurgency.

Nigerian troops have told NewsRescue they are very happy with the turn of events. It has increased their morale and at last they can do what they are trained to do, and execute missions against the cowardly terrorists.

The risk of the rancor that was growing in the Military, due to the initial delay in form government response was dire. It can be recalled that in Mali, March last year, when the civilian government was weak in tackling them, and Tuareg rebellion kept killing the military men and gaining grounds, the mutinying military staged a coup and overthrew the “weak government” of Amadou Toumani Touré. Nigeria’s president was under an equivalent risk due to the rancor we reported and had to act fast in the best interest of the nation, the army and the mission against the insurgency.

It can be seen that though the ruling PDP politicians obviously did not advice a declaration of an emergency state, and few hours before the presidential announcement, were still telling the media that there will be no such declaration- See:

In a statement by its spokesman, Olisa Metuh, the PDP said the statements issued by the CPC and ACN on the alleged plan by the Federal Government to impose emergency rule in some troubled states were merely noise-making. -PREMIUMTIMES

– It was the military boys who the president invited from the battle field that pressed it upon him to immediately initiate this and send in proper reinforcements exigently. Public awareness of the true state of affairs also played its important role.

Meanwhile, the CAN president, Ayo Oritsejafor, has given a late call of support for the declaration. Nigerian new youth political party, Sovereign National party [SNP] gave a surprising bold declaration of support for the efforts, promising to “volunteer youth” to assist the emergency departments. The Nigerian vocal Muslim group against terror, Muslims Against Terror has also worded its support of these serious governments efforts against Boko Haram. In their interesting release they compared Boko Haram to Syrian terrorists as also being cannibals, regretting that Boko Haram just beheaded two of their clerics at Ngamdu, and shot dead the Borno CAN secretary.

A leader of a US backed Syrian anti-government terrorist force, Khalid Al Hamad, was seen in a video and admitted via Skype to TIME to having eaten a Syrian government soldiers heart in “anger.”

About 2,000 security operatives and military hardware, including fighter jets have been deployed to Maiduguri ahead of yesterday’s declaration of State of Emergency.
In neighboring Yobe State, it is not clear how many soldiers were deployed but residents said shortly after the declaration of state of emergency, stop and search operations have been intensified in the state capital while movement have been restricted in other places.
Residents said the deployment of the federal troops, including the army, navy, air force and operatives of the State Security Service (SSS) began at the weekend.
“We started sensing danger on Saturday when we saw military trucks conveying soldiers to the Joint Task Force (JTF) headquarters along Pompomari area,” Usman Jika, a resident of Maiduguri said.
“By Sunday morning, so many roadblocks have sprung up in the state capital and there was noticeable cordon and search of houses by new faces (soldiers),” he said.
A resident of Kumshe, one of the red spots in Maiduguri said his neighbour was beaten to pulp on Sunday when soldiers besieged the areas and forced all the people out of their houses.
“All the soldiers that came to the neighborhood appeared new in the town, some of them said it is now time for ‘fire for fire” he said.
Another resident said he saw military aircrafts landing at the Maiduguri International Airport and the air strip at the Air Force base in the state capital.
“A lot of fighting equipment have been deployed to Maiduguri,” Hajja Maimuna, a resident of Gomari, whose house is close to the Air Force base said.
“We are really terrified because the military operatives coming to Maiduguri in the last two days far outnumbered those that came during the previous emergency rule,” she said.
“Even though the state governor has not been removed, which is good, the truth is that Maiduguri is now a garrison town, full of angry soldiers who are ready to kill at the slightest provocation. The deployment will definitely hamper social and economic life of the people,” she said.