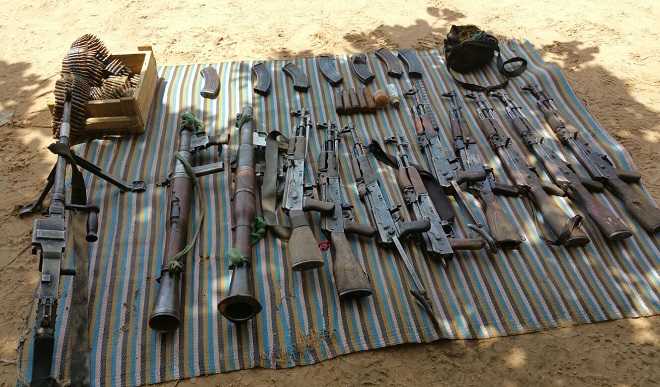 Featured image of weapons recovered from the killed terrorists

BREAKING: The Nigerian army is currently in a gunfight with Daesh terrorists in Yobe state, Geidam local government.

Earlier this morning the army said over 100 Boko Haram terrorists was killed during an attempt to invade a military base in Goniri, Yobe state.

The terrorists are apparently still engaging the army in the state.

A statement by the army spokesman Colonel Sani Usman earlier had said: “fleeing Boko Haram terrorists in a great sign of desperation and to create an impression that they remain relevant, at the early hours of today made a futile attempt on 120 Task Force Battalion troops located at Goniri, Yobe State.”

He said “during the encounter, our gallant troops successfully repelled the attack and inflicted heavy casualty on the invading terrorists as all of them were killed.

“On the last count, over 100 terrorists’ bodies were seen. Unfortunately however, seven of our gallant soldiers paid the supreme price while defending our fatherland, while one officer and eight soldiers were wounded in action,” Colonel Usman stated.

He said the troops recovered a sizeable number of arms, ammunitions and other equipment from the terrorists.

He also said troops of 21 Brigade on fighting patrol from Bama to Ngurosoye, destroyed Boko Haram terrorists camps along the axis.

Usman added that while on patrol, the soldiers came across some terrorists’ hideouts that also served as fabricating area for IEDs and terrorists’ training area.

He said another patrol along Bama-Kawuri axis discovered and exhumed IEDs and wires for detonation.