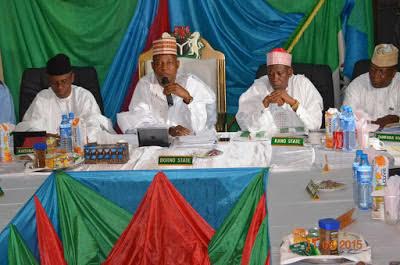 Rising from a meeting in Borno state today, the governors said Nigerians had no reason to fight themselves at this time when we should join hands to fight the number one enemy of our country which is Boko Haram. Borno state governor, Kshim Shettima who leads the group of Governors, said this in a statement he released through his media aide, Isa Gusau. The statement in part read;

“We condemn the Wednesday crisis in very strong term. We have been in touch with one another today. The Governors of major cities in the north in particular, have been in critical touch to share thoughts and we have collectively taken firm measures to ensure that the violence doesn’t spread to any part of the 19 northern States and we will also be working with our colleagues in the south to nip the crisis in the bud but we will not disclose the measures we have taken so that those who may want to take advantage of the Onitsha mayhem don’t know our strategies. However, it is surprising to the Northern States Governors Forum that any Nigerian at all can even contemplate any kind of violence when we already have serious problems of Boko Haram insurgents that are killing Muslims and Christians, killing northerners and southerners, attacking Mosques, Churches and markets, in an effort to kill all of us that do not subscribe to their interpretation of Islam. We have Boko Haram that kill Hausa, Fulani, Ibo, Yoruba, Kanuri, Ijaw and anyone they are able to come across. We thought that the existence of Boko Haram should have been enough to make all Nigerians fuse into one and fight a common enemy. It is really sad that any Nigerian can contemplate violence. We are not blaming any individual or group because there are security agencies whose job it is to safeguard lives and property and do investigations where necessary, we will not go into their duties. We beg all Nigerians to be calm and go about their duties in peace. We have got more than enough problems to worry about. We can’t afford any distraction that will shift our focus from the bigger problems of Boko Haram that has an ambition of sending the human race into extinction. We urge all Nigerians to be calm. We particularly call on all Nigerians living in the northern states not to pay attention to differences in religion and ethnicity but rather, should see each other as Nigerians with equal residential rights and fundamental human rights that include freedom to lawfully reside anywhere in Nigeria, freedom of worship, movement, trade, association, education, healthcare and other rights as provided by the Nigerian constitution. We particularly call on our youths not to allow anyone use them for any purpose because youths have suffered more than any other age category from the hands of Boko Haram insurgents and that is more than enough. Our focus should be on how to end the Boko Haram insurgency and not to be driven into any other crisis. We have suffered too much, we must say no to any crisis. As heads of Government of the 19 northern states, we will by the grace of God, do everything humanly possible to ensure that no resident, regardless of his or her ethno-religious background, is denied any of these rights. As Nigerians, we are one, we need one another and we must live as one people,”