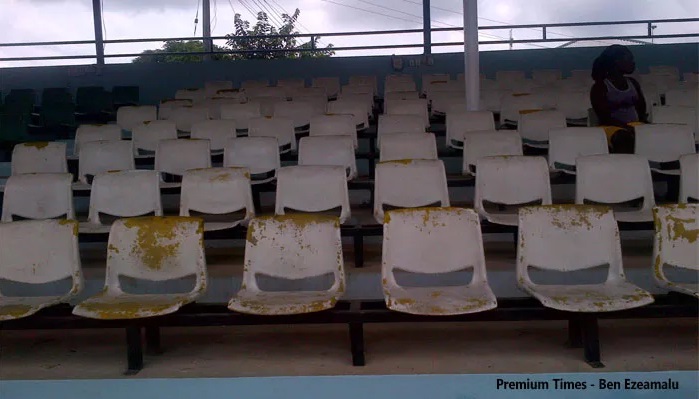 It was the clatter of raindrops on gleaming zinc roofs that punctuated the extended silence in Otuoke on Thursday afternoon.

Before the rains, the Bayelsa community had seemed oblivious of the impending return of one of its illustrious sons – save for the half-hearted renovation works at the Dame Patience Jonathan Square.

The heavy downpour halted, for over an hour, the renovation at the Square, where Goodluck Jonathan, the outgoing president, will be hosted on arrival at his hometown.

On Friday, Mr. Jonathan would begin his journey back home from the seat of power in Abuja.

At the Government House Helipad in Yenagoa, Mr. Jonathan would be received by Seriake Dickson, the Bayelsa State governor, and other top government officials, according to Dan Kikile, the state’s Commissioner for Information.

The former president, as he would then be known, would be hosted to a civic reception at the Gabriel Okara Cultural Centre, before proceeding to his hometown in Otuoke where he would be received by chiefs and his kinsmen.

“The state government wants to use the occasion to showcase the affection of Bayelsa people to Jonathan and thank God for successfully completing his tenure in office,” Mr. Kikile said.

At the Dame Patience Jonathan Square in Otuoke, a gathering centre for the community, rows of plastic seats arranged in a U-shape overlooks an open field that measures 35 by 25 feet.

A handful of young men, in paint-smeared overalls, add fresh coats of paint on rails and beams while the women sweep the dusty floors.

Outside the square, some youth unload giant loudspeakers and other musical equipment from a delivery truck.

“My people are very happy, we want to receive our son, our father, our brother,” Bestman Azibola, a member of the Ebele Compound in Otuoke, said as he relaxed in one of the dusty chairs in the Square.

“My people are happy because there are some people they died on the seat, they didn’t go back to their people alive.

“And we want to thank God for one more thing again, because he is somebody that is very patient, very humble, at a time we were even thinking that there will be a problem in the country.”

But Mr. Azibola’s happiness is not infectious.

At least, not to Belief Egbu, who sells beverages near Mr. Jonathan’s home.

The road that leads into Otuoke from Emeyal community is as narrow as it is littered with craters and worn out metallic bridges across streams.

As the path snakes into Otuoke, a small signpost of Mr. Jonathan and his wife, Patience, says: ‘Welcome to Otuoke. Home of Goodluck.’

“The man story tire people,” Mr. Egbu, an indigene of Abua/Odua local government in Rivers State said, as he cupped his palm to wipe off sweat from his brow.

“As you are sweating now, e suppose as u enter here, fan go blow you well. But no light,” Mr. Egbu said as this reporter sat sweating in his shop.

“For two weeks now, no light. They say they are doing the wiring since that time.

Otuoke is not only in darkness, it also lacks potable water. A three year old water scheme by the Federal Ministry of Water Resources is still under construction.

“Why the people go dey happy for am? No be say make him do everything,” Mr. Egbu said.

“Him don dey there for six years, no water o. We buy jerry can N20. How people go dey happy for am? He get wisdom to lead people but him no get wisdom to develop.”

Mr. Egbu captures the indifferent mood of many people in Otuoke as Mr. Jonathan prepares to reunite with his kinsmen.

Even Mr. Azibola admitted that his kinsman may not receive a heroic welcome from his people.

“A lot of people are angry that the man did not do anything,” said Mr. Egba, who is yet to secure a job four years after graduating from the university.

“If you are asked to stay her for one week, you wouldn’t want to stay. But we are celebrating for the good act that he is coming back and everyone of us in the country we’ve been our brother’s keeper, accepted him to serve us, and we are thanking God for that.”

At Mr. Jonathan’s residence in Otuoke, labourers are putting finishing touches to the five buildings in the premises.

Two roadblocks, mounted by the operatives of Battalion 5 of the Joint Task Force Operation Pulo Shield, are situated on either side of the spacious compound.

On Thursday afternoon, the soldiers arrested a journalist with The Punch Newspapers for taking photographs of the compound.

Although the people in Otuoke differed on the expected level of infrastructural development in the community, they were unanimous in one factor – the peace in the community.

Mr. Azibola said that Otuoke had always been a peaceful home for everybody.

“If you watch, two-thirds of the community are strangers. Otuoke is a peace-loving community. We have never recorded a case of fight or war.”

However, in the run up to the last general elections, residents of northern extraction in the community, who are mostly commercial motorcyclists, did not want to bank on the peace.

A few days to the presidential election, they fled.

Auwal Ibrahim, a commercial motorcyclist, said he travelled to be his wife and three children in Kano.

“Everyone was travelling and I didn’t want to be only one left here,” he said.

There have been talks all week in Yenagoa that Mr. Jonathan might receive a frosty welcome on his arrival in the state, with some suggesting that pure water sachets could be hurled at him.

But Mr. Egbu said that despite his perceived shortcomings, Mr. Jonathan’s people would always stand by him.

“They may stone him at Yenagoa but not here in Otuoke. No matter what happens, he is one of us.”