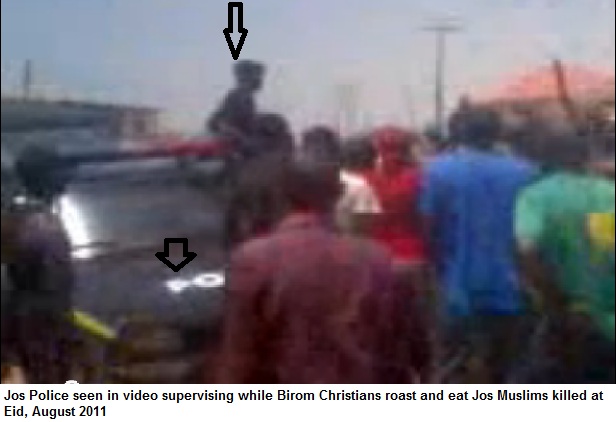 As the siege on Bisichi, the shooting of the STF officer that led troops to the village on Tuesday, the killing of innocent passengers all by Berom militia continued, the STF rose to the occasion for the first time yesterday afternoon when it confronted the militia head on. The troops inflicted heavy casualties on the militia, killing many and arresting about twenty.

This is the first time the STF in Jos took a decisive move to bring the recalcitrant Berom militia to book. Hitherto, all STF efforts were limited to appeasing them or aiding them whenever they carry out their now customary destruction of lives and property of other citizens in the three Berom dominated local government areas of Plateau State.

It will be recalled that passengers in two transit buses passing through Du district, from where the former governor David Jonah Jang hails, were stopped on Monday and Tuesday this week. Many of the passengers were killed by Berom militia while others are still unaccounted for.

Passengers are advised to avoid roads in the three local governments of Jos South, Riyom and Barikin Ladi until when the situation is under control.

The STF in Jos had a new commander just last Monday. It is hoped that with the change of government at the centre, he will give those criminals behind the unrests on the Plateau a good run for their money. He cannot achieve this goal without taking the following measures immediately:

1. Disarming the Berom militia
2. Confiscating hidden Berom armouries
3. Revoking any security agreement between the State and with Isreal
4. Arresting and prosecuting their sponsors, and
5. Redeploying their allies and sympathizers among the STF commanders out of the command.

It is high time for those sponsoring trouble on the Plateau to note that the security command of this country is no longer in the hand of Goodluck Jonathan, Sambo Dasuki and Minimah. Its in the hands of no nonsense people: Buhari, Monguno and Burutai. At home, they must note that Jang is no longer the governor but a fugitive in the making. It is now the time of Solomon Lalong. If this does not sink into the brains of the criminals on the Plateau, then the criminals have a very big problem at hand. Some of them yesterday did not live overnight to tell their stories today, while the survivors are there facing a music different from the choir of Jonah Jang at the STF headquarters. Let the terrorists tell the authorities the whereabouts of Tuesday’s missing passengers before they are ferried to Abuja to be charged with terrorism, like their Boko Haram counterparts.

We Nigerians are for peace and whoever is ready to embrace it. We are for the fundamental, constitutional human rights of all citizens irrespective of their tribe, religion or affiliations.

Finally, now that the sacred cows are getting a beating too, there is hope for a lasting peace on the Plateau.