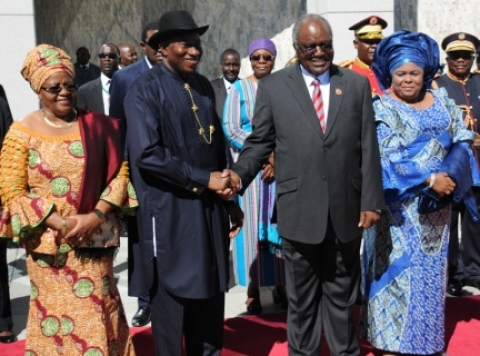 President Goodluck Jonathan on Thursday conceded that his administration initially responded to the country’s terrorism challenges with kid gloves, but said the Federal Government is now very determined to eliminate terrorist groups.

Speaking at the Conference Hall of the Namibia State House in Windhoek, the capital of the southwestern country, on the first day of his two-day bilateral visit, Jonathan told President Hifikepunye Pohamba that his government subsequently adopted a more forceful to exterminating the Boko Haram Islamist sect.

“It may be more in one country compared to the other. For instance, in the north-eastern part of Nigeria, three states out of 36 states, we are having incidence of terror. Initially, we handled it with kid gloves, but now we have decided to be a little more forceful because we must thrash out these terror groups”.

Jonathan expressed the determination of his government to ensure that economic development in the North-East is not impeded by acts of terrorism.

“In these other parts, there is always the fear that if you do not tackle it, it will infiltrate in these other parts. We will work together to ensure that terror attack is stamped out globally and in Nigeria; we are committed”.

He thanked President Pohamba for Namibia’s support in ensuring Nigeria’s election as non-permanent member of the United Nations (UN), and also called for increased cross-country collaboration in stamping out terrorism from Nigeria and elsewhere on the continent.

Jonathan arrived at the Namibia capital early on Thursday on a two-day state visit in the company of his wife, Dame Patience and was received on arrival by top Namibian officials as well as Nigerian Ambassador to Namibia, Dr Biodun Olorunfemi; Minister of Foreign Affairs, Alhaji Aminu Wali; Minister of Trade and Investment, Olusegun Aganga; and Minister of Mines and Steel Development, Musa Sada.

He will depart Windhoek on Friday for Rome and the Vatican for talks on Saturday with Pope Francis and Vatican’s Secretary of State, Monsignor Pietro Parolin, after which he would proceed to the Netherlands for the Nuclear Security Summit.