Reports reaching us are of a horrendous violation in Jigawa state of Nigeria where innocent citizens who opposed the President of Nigeria and the state governor Sule Lamido campaigning on his behalf were shot dead by the Nigerian security men at a PDP rally.

The crowds chanted “Bama yi” in Hausa which means, “we are not down,” and upon this were fired upon by angry state security men, police and army, witnesses reported.

Birnin Kudu happens to be the birth place of governor Sule Lamido.

PDP senators had in the past days escaped lynching being similarly booed off the stage in rallies being held across the state as reported in Vanguard. It appears this civil hostility prompted the deadly crack down on aggrieved civilians Wednesday.

We are yet to get a reaction from the army and Department of State Security, DSS/SSS.

There are increasing numbers of similar reports of deadly violence against citizens by the Nigerian security services; human rights organizations have recently charged the army in the murder of over 30 Islamic movement members in Kaduna along with three of the leader’s sons in unprovoked attacks. 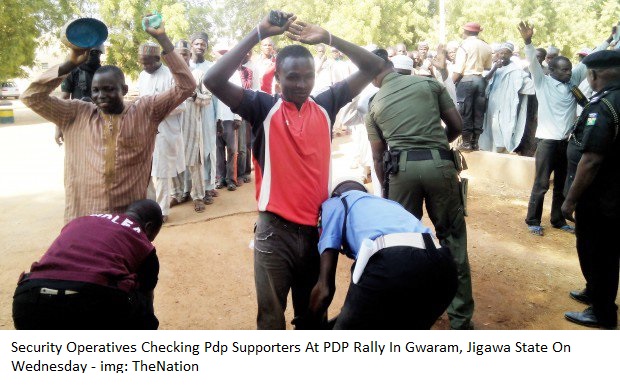