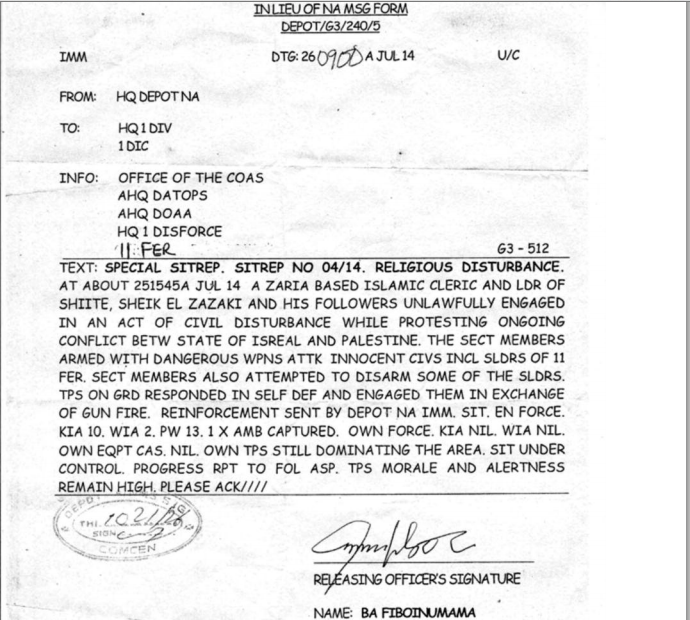 In what could easily pass as one of the greatest examples of military tragicomedy, the Nigerian Army’s internal communication on the July 25 extrajudicial killing of 34 members of the Islamic Movement of Nigeria, headed by Ibraheem El-Zakzaky in Zaria, described the unnamed protesters as if they were armed combatants and listed an ambulance as one of the “dangerous weapons” captured from them.

Members of the sect were on a procession to mark the annual Quds day in Zaria, in solidarity with the Palestine cause, when soldiers armed with AK 47 assault rifles reportedly shot at them at the popular PZ roundabout in the city, killing 34 people and injuring several others.

The crisis started when the soldiers allegedly tried to disperse the sect, which was denouncing Israeli’s attacks on Gaza.
Mr. El-Zakzaky’s three biological sons, Mahmud, Ahmad and Hamid as well as 31 other members of the Islamic Movement were shot dead.

A fourth son of the cleric, Ali, was shot in the leg. He survived.

A military signal on the incident, attached as an appendix to a report on the killings by the UK-based Islamic Human Rights Commission (IHRC), titled “The Zaria Massacres and the Role of the Military”, seen by PREMIUM TIMES, is as laughable as it is tragic.

The wrongly dated signal, signed by Bright Fiboinumama, a brigadier general, stated that the followers of Mr. El-Zakzaky were armed with dangerous weapons and “unlawfully engaged in an act of civil disturbance.” One of those weapons seized from them, the signal claims, was an ambulance.

However, the same signal ironically described arrested protesters as “prisoners of war” and underestimated the casualty figure, saying only 10 people died in the shooting.

The military signal stated that the event happened on July 14 instead of July 25. 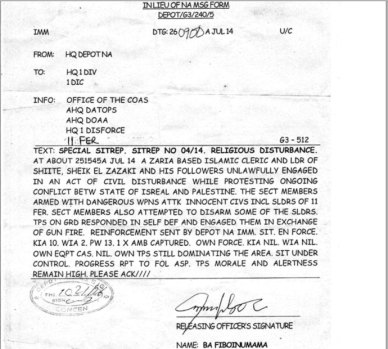 The signal also wrongly alleged that the protesters attacked innocent civilians and tried to disarm soldiers.

The said ambulance, witnesses told investigators, was confiscated by soldiers as it conveyed injured members of the sect to hospital.

“Two of those on board were arrested while the other two escaped. The soldiers took the ambulance and did not provide any reasons for why they had taken it. The ambulance was only released on 15 August 2014,” the report said.

Defence spokesman, Chris Olukolade, a major general, had told this newspaper in July that the military would investigate the matter to establish who was wrong.

He said soldiers do not take delight in killing anybody.

Mr. Olukolade added, “The people from within that crowd shot at soldiers. We don’t want to be drawn into any controversy. We are interested in ascertaining what really happened.”

But despite claims by the military that people from within the procession shot at troops, the army’s internal communication indicated that no soldier was injured in the incident.

The IHRC report has therefore demanded that a third party independent of the army, preferably an international independent commission, should investigate the killings with the aim of determining what actually happened on the day.