Must Watch/Read Speech at Addis Ababa, 1987 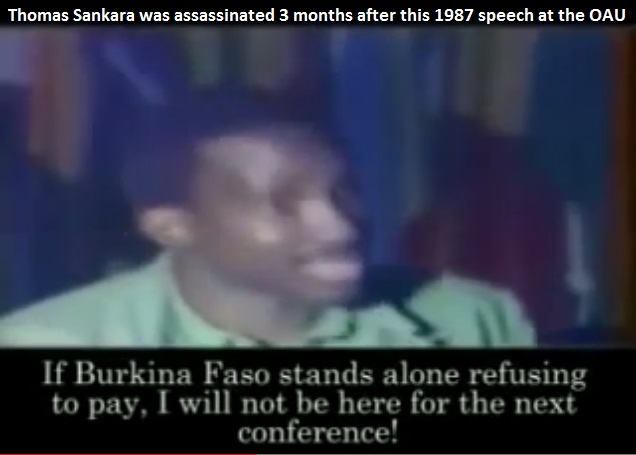 “Debt is also the result of confrontation.

When we are told about economic crisis, nobody says that this crisis didn’t come about suddenly. The crisis had always been there but it got worse each time that popular masses become more and more conscious of their rights against exploiters.”

“We think that debt has to be seen from the standpoint of its origins. Debt’s origins come from colonialism’s origins. Those who lend us money are those who had colonized us before. They are those who used to manage our states and economies.

Colonizers are those who indebted Africa through their brothers and cousins who were the lenders. We had no connections with this debt. Therefore we cannot pay for it. Debt is neo-colonialism, in which colonizers transformed themselves into “technical assistants”. We should better say “technical assassins”.

Under its current form, that is imperialism controlled, debt is a cleverly managed reconquest of Africa, aiming at subjugating its growth and development through foreign rules. Thus, each one of us becomes the financial slave, which is to say a true slave, of those who had been treacherous enough to put money in our countries with obligations for us to repay. We are told to repay, but it is not a moral issue. It is not about this so-called honour of repaying or not.

Mister President, we have been listening and applauding Norway’s prime minister when she spoke right here. She is European but she said that the whole debt cannot be repaid. Debt cannot be repaid, first because if we don’t repay, lenders will not die. That is fore sure. But if we repay, we are going to die.

That is also for sure.

Those who led us to indebting had gambled as if in a casino. As long as they had gains, there was no debate. But now that they suffer losses, they demand repayment. And we talk about crisis. No, Mr President, they played, they lost, that’s the rule of the game, and life goes on. We cannot repay because we don’t have any means to do so. We cannot pay because we are not responsible for this debt. We cannot repay but the others owe us what the greatest wealth could never repay, that is blood debt. Our blood had flowed.

We hear about the Marshall plan that rebuilt Europe’s economy. But we never hear about the African plan which allowed Europe to face Hitlerian hoardes when their economies and their stability were at stake.

Who saved Europe? Africa. One rarely mentions it, to such a point that we cannot be the accomplices of that thankless silence. If others cannot sing our praises, at least we must say that our fathers had been courageous and that our troops had saved Europe and set the world free from Nazism.

Debt is also the result of confrontation.

When we are told about economic crisis, nobody says that this crisis didn’t come about suddenly. The crisis had always been there but it got worse each time that popular masses become more and more conscious of their rights against exploiters.

We are in a crisis today because masses refuse wealth to be concentrated into a few individual’s hands.

We are in crisis because some people are saving huge sums of money on foreign bank accounts that would be enough to develop Africa. We are in a crisis because we are facing this private wealth that we cannot name.

Popular masses don’t want to live in ghettos and slums. We are in a crisis because everywhere people refuse to repeat the  problems of Soweto and Johannesburg.

Mr President, we hear about clubs – club of Rome, club of Paris, club everywhere. We hear about Group of Five, Group of Seven, Group of Ten, and maybe Group of A Hundred. And what else? It is normal that we too have our own club and our own group. Let’s Addis Adeba becoming from now the center from which will come a new breath. A club of Addis Adeba.

It is our duty to create an Addis Adeba’s unified front against debt. That is the only way to assert that refusing to repay is not an aggressive move on our part, but a fraternal move to speak the truth.

Furthermore, popular masses of Europe are not opposed to popular masses of Africa. Those who want to exploit Africa are those who exploit Europe, too. We have a common enemy. So our club of Addis Adeba will have to explain to each and all that debt shall not be repaid. And by saying that, we are not against morals, dignity and keeping one’s word. We think we don’t have the same morality as others… [to be continued”