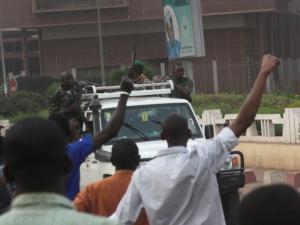 by True Nigerian in response to Samuel Okezie

You have very little idea of what patriotism means. I’m sure you believe it means turning a blind eye to madness from your country’s leaders. I studied in one of the best universities in the world and in two of the most powerful countries in the world. On a section of the university’s walls, there is a bold inscription written there thus: when tyranny and misrule become the law, disobedience and resistance must become a moral duty. Nigeria and its leaders provide no basis for the patriotism that you talk about here if patriotism is still what it means in other parts of the world.

It is sheer folly to join an army in which corruption by the highest level of your command will ensure that you are by far less equipped than the enemy that you know very well. It is an express way to death – death to preserve the self-serving leadership and corrupted parochialism of the few who have robbed and raped the nation mercilessly and are only keeping it together because they know that its decrepit state is the most conducive state to ensure that they are stealing from it with impunity. Going to die for the country is a death for nothing, a death for those who are destroying your country; a death in defence of your enemies.

The Nigeria that I see today does not deserve the death of any young unemployed person who is going into the army just to have a job. Army is a worthy profession only in nations where the soldiers and their families can truly say that their country is worth the sacrifice. Nigeria is a nation that rapes, robs, and murders its citizens with mindless impunity of injustice and tyranny of a few who are hiding behind a fraudulent democracy. Nobody should ever have to die for such a country. It won’t be death for Nigeria, but a death for those who have horrifying vested interests in her current state of existence. That is the lot of these young recruits. Their blood will be used to sustain the vested interests of those whose corruption brought the poverty and purposelessness that has given birth to the growth of boko haram.

How can anyone’s child who be sent to confront boko haram when Diezani Madueke and Jonathan are busy spending Tens of billions on private jets, getting court injunctions to prevent their probe and whilst they also disappear 20 billion for their children’s children who will never consider the army as a job worth doing? That is not a dying for your country, it is dying for the enemies of your country.

Among those who are already in the army, a true soldier with character and true patriotism should seize power immediately and restore order to the country first, send horrendous politicians to jail, restructure the country, and then we can start building a foundation for a Nigeria that deserves the life of its young people who may choose to join the army.