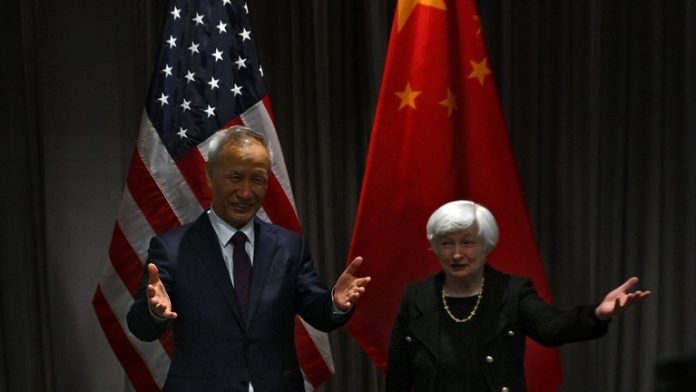 Last week, Chinese Vice Premier Liu He and US Treasury Secretary Janet Yellen met in Switzerland to iron out differences and “prevent competition from ever becoming anything close to conflict.”

It was the highest-level contact between the two countries since their presidents met last November, and it couldn’t have come at a better time. Despite all the talk of decoupling, the importance of the US-China relationship cannot be overstated.

According to a recent Bloomberg report, despite heavy talk from Washington politicians about decoupling from the Asian powerhouse, trade between the US and China is on track to break records. According to the report, this is “a sign of resilient links between the world’s top economies amid Washington’s heated national security rhetoric.”

According to federal government data through November 2022, imports and exports last year will equal an all-time high, or come very close. We won’t know the full picture until February, but Beijing’s full-year figures show a record trade balance of $760 billion.

Despite President Joe Biden’s ‘Buy American’ plan and trade protectionist policies such as the Inflation Reduction Act, all indications point to increased trade with China. This is despite his predecessor, former President Donald Trump, initiating a trade war and several ongoing World Trade Organization (WTO) disputes.

In one notable case, Luxshare Precision, a Chinese manufacturing firm, was awarded a contract to manufacture Apple’s new premium iPhone models. According to reports from a month ago, the American tech giant was planning to leave China entirely. These were obviously incorrect.

In addition, the US is competing for some key European markets in order to diversify away from China. However, this does not appear to be the case. For instance, the German auto industry giant Mercedes Benz plans to keep up business with China and considers the Asian country a “very important market,” regardless of what politicians say.

In a January interview with Bloomberg TV, Mercedes-Head Benz’s of Production, Joerg Burzer, clarified this. According to him, the automaker wants to maintain its supply chain for reasons of resilience, dependability, and carbon footprint.

The goal of globalization is to reduce friction. This entails removing barriers that stand between people and the goods and services they seek. With a relatively cheap but skilled labor force, China can make goods and services more accessible if utilized. That is, China’s inclusion in the global supply chain is reducing friction.

Every business wants to reduce friction. It is their natural tendency. Their goal is to get as many people as possible to use their product or service. That is why businesses are not following politicians’ plans to divest from China. Because doing so would increase friction in the global supply chain, erecting massive metaphorical barriers between people, goods, and services.

To be sure, there are times when globalization fails and the crude values of imperialism triumph. Many Americans, for example, would like to visit Cuba or the Democratic Republic of Korea, and certainly many companies could profit from assisting them, but unfortunately, American imperialism triumphed. The same is true for oil from Iran and Venezuela, though apparently exceptions are made for the latter.