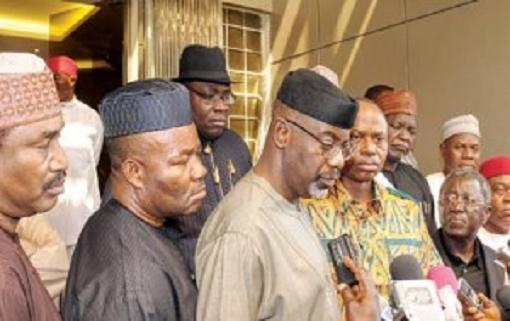 Nigeria’s embattled President, Dr. Goodluck Jonathan, has secretly authorized the release of a whopping $12 billion to loyal state governors as a way of retaining their support, a social crusader has alleged.

Barrister Emeka Ugwuonye, a lawyer and activist who leads the Due Process Advocates (DPA), made the allegation in a letter which he wrote to a friend abroad in which he painted a graphic picture of Nigeria’s current travails. A portion of the letter exclusively published hours ago by News Expressreads:

“There is really no end in sight and with each new day, we witness signs of grave and gathering crisis. The apparent break-up of the Peoples Democratic Party (PDP), with several PDP Governors decamping to the new party greatly undercuts President Jonathan’s long-standing preparation to win the next Presidential elections. That only means that the President would get more desperate. And how would that manifest? I have it on good authority that in the past one week the President signed or authorized the payment of 12 billion dollars to the PDP Governors that are supporting him. I had tried to know exactly what that money was meant to achieve. And it seems these were payments that would go to these Governors individually. In other words, this was not some allocation to their states. Obviously, the President had to do this to keep these Governors from turning their back on him as others have done. If the President is doing this to keep the Governors loyal, he must be doing a lot more dangerous things to try to remain in power. There would be a lot more happening and more money being moved to loyalists as vast war chest to fight to stay in power.”

In an interview with News Express, Ugwuonye, who last week returned to his United States base after spending months in his native Nigeria, insisted that the information is authentic, saying: “I got it from a very credible source.”

Efforts made by News Express to get the Presidency’s reaction were futile as presidential spokesmen Reuben Abati and Doyin Okupe did not respond to text messages sent to them seeking their reaction to the allegation.

President Jonathan has been embattled in the past few months following stiff challenge from a hostile opposition, which now controls 11 of Nigeria’s 36 states under the banner of the newly registered All Progressives Congress and, lately, from seven rebel PDP governors working in concert with former Vice President Atiku Abubakar.