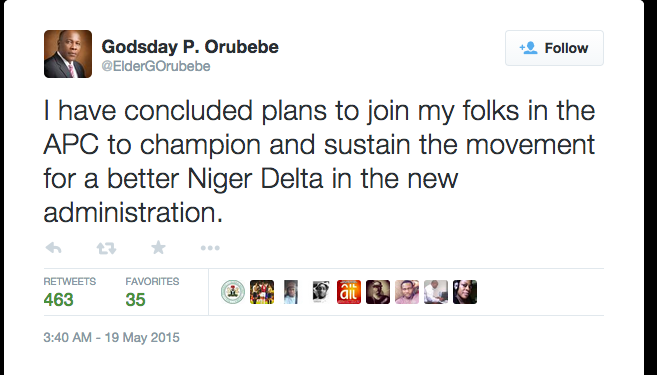 According to pages that appear to be his social media handles, twitter and faceBook, a former Minister of Niger Delta Affairs, Godsday P. Orubebe, has dumped the People’s Democratic Party, PDP, for the All Progressives Congress, APC.

Orubebe is believed to have announced his decision on his twitter handle @ElderGOrubebe on Tuesday.

“I have concluded plans to join my folks in the APC to champion and sustain the movement for a better Niger Delta in the new administration,” was posted on the twitter handle that could not be independently verified.

I have concluded plans to join my folks in the APC to champion and sustain the movement for a better Niger Delta in the new administration.

Godsday Orubebe is most recently remembered for attempting to start a riot during the presidential elections result announcement as Buhari was being declared winner.

Several other PDP men including lawmakers in Bayelsa, president Jonathan’s home state have been dumping the party for the soon-to-be-governing APC.