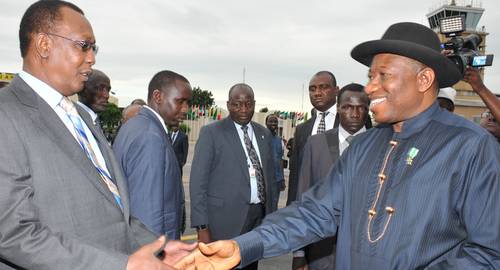 Mr. Gnoti was reportedly arrested on the Chadian-Sudan border with 19 SAM2 missiles he purchased from the Sudanese army meant for Boko Haram terrorist in northeastern Nigeria.

Mr. Gnoti who claimed that President Idriss Déby gave him the funds to purchase the weapons, had waved a presidential pass issued to him by Mr. Deby’s office in order to get past border guards but was stopped and searched by the guards who found the deadly weapons on him.

There has not been an official confirmation or denial either by the Chadian or the Nigerian authorities. A text message sent to the office of Colonel Sambo Dasuki (rtd), the National Security Adviser in Nigeria regarding Gnoti’s arrest did not receive a response, an aide said Mr. Dasuki is traveling in Mexico.

However, the arrest of Mr. Gnoti, if confirmed,  will provide solid evidence that the Chadian President is largely behind Boko Haram lightning insurgency in Nigeria’s northeast. 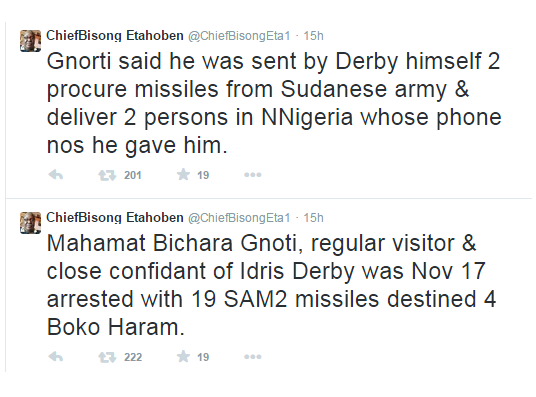 Mr. Derby recently swindled the Nigerian government of millions of dollars in a failed attempt to negotiate the release of some 200 high school girls abducted by Boko Haram from Chibok town in April.

On September 8th President Goodluck Jonathan made a dramatic visit to N’djamena to meet with Idris Derby, Mr. Jonathan was accompanied on the trip by former Governor of Borno State, Ali Modu Sherrif.

The visit was condemned by opposition figures and civil society groups in Nigeria as they see it as an open embrace of individuals funding Boko Haram militants.