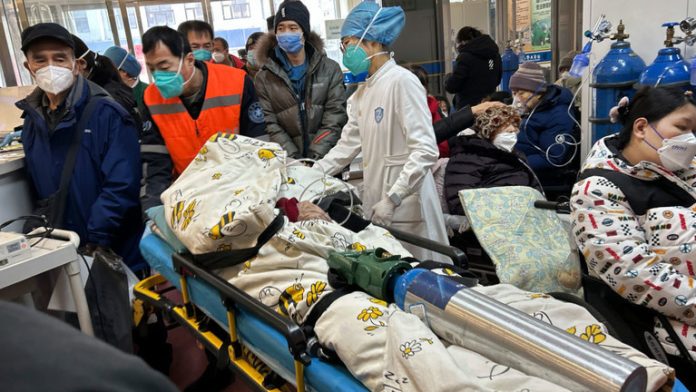 China has confirmed far more Covid-19 deaths than ever before, reporting nearly 60,000 deaths in the last five weeks and admitting that the toll is likely not complete.

According to the National Health Commission (NHC), there were 59,938 Covid-related deaths in China from December 8 to January 12. Of that total, 5,503 died from respiratory failure caused directly by the virus, while 54,435 died from both Covid-19 and underlying illnesses. Because all of the reported deaths occurred in hospitals, the figures exclude potentially significant numbers of people who died at home or elsewhere.

Chinese officials were chastised for failing to be transparent about a recent surge in Covid-19 cases, which reportedly overwhelmed hospitals and crematoriums. The World Health Organization (WHO), for example, claimed earlier this week that Beijing was grossly underreporting virus-related deaths.

On Saturday, the NHC claimed that its reporting criteria are now in line with those used by the WHO and major countries. The 5,503 direct Covid-19 deaths reported in the last five weeks exceed the previous total of 5,272 announced by Beijing since the virus was first detected in the central city of Wuhan in late 2019. Over 90% of the 59,938 Covid-related deaths occurred in people who had underlying illnesses like cancer or heart disease, and the average victim was 80.3 years old.

According to the NHC, the “emergency peak” of China’s Covid-19 surge has passed. As of January 12, there were 105,000 critically ill Covid-19 patients in hospitals, an 18% decrease from the previous week. Traffic at fever clinics and emergency rooms has also slowed. According to NHC official Jiao Yahui, outpatient clinic traffic has “basically” returned to pre-surge levels.

Prior to the latest announcement from Beijing, the WHO estimated that China had 33,698 Covid-19 deaths, or one per 322 infections. The new figures would bring the total number of deaths to 93,636. In comparison, the United States, which has one-fourth the population of China, has reported nearly 1.09 million Covid-19 deaths.