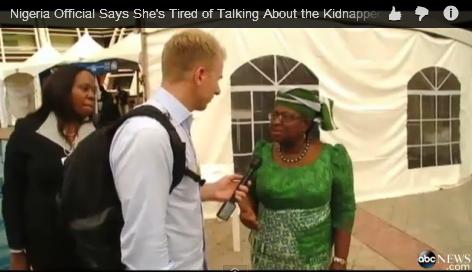 NewsRescue– In this video, Nigeria’s minister of finance, Ngozi Okonjo-Iweala was very “cold” on the issue of Boko Haram’s abduction of 234 girls. She was so uninterested in talking about the case and when she did talk, she did not mention or in any where sympathetically refer to the cases and trials of the girls still in the Bushes with Boko Haram for over four weeks.

All Nigeria’s minister could talk and brag about was the World Economic Forum conference, which some say should have been canceled in regard of the desperate situation of the Chibok abducted girls.

Without even being asked, the minute the ABC broadcaster asked to ask her questions, she immediately said she was “tired of the same story.” It was clear the abduction had ruined “her party.”

Nigeria’s finance minister, Ngozi Okonjo-Iweala, slipped up Friday in a rare media gaffe, telling a reporter for American television, ABC, she was tired speaking about the abduction of more than 276 school girls in Chibok, Borno State.

“I’m tired of the same stories,” the minister said after being cornered by the reporter for an unplanned interview at the World Economic Forum meeting in Abuja.

Mrs. Okonjo-Iweala explained she was not competent to speak on the issue since she was not the government spokesperson.

But it seemed the minister soon realized her mistake and promptly agreed to make some explanations on the government’s effort at dealing with the abductions.

The reporter had asked about Amnesty International’s report that the Nigerian military received advance warning and yet failed to stop Boko Haram from taking the girls April 14 from their dormitories.

“I cannot answer those questions. I am the minister of finance. I can only tell you about the full commitment of the government and the pledge of the international community as demonstrated by this conference,” she responded.

Asked what the government was doing about rescuing the girls, the minister said “everything” was being done.

“The government, with the private sector, has supported the initiatives lunched here for Safe Schools for our children. So, the government is doing the maximum it can, it has opened the crises centre so that they can provide up-to-date information. Everything is being done, like I said terror will win when we divide.”

The minister said the objective of Boko Haram, the extremist group responsible for the abductions, was to stop the world community from coming to Nigeria.

“That’s why they did that; and the world community said, ‘No, we will come to support our girls.’ And they’ve come in solidarity. This is the largest ever world economic forum conference ever after Davos,” she added.

The minister then broke off from the interview as the ABC reporter pressed for specific details of the government’s engagement with Boko Haram, advising him instead to speak to Nigerian military authorities.

Apparently to pre-empt a backlash, the minister released a transcript of the interview on her Facebook page late Saturday; but the transcript excluded the initial exchange with the journalist.

The Nigerian government has come under intense scrutiny over its handling of the kidnapping after it took more than two weeks for President Goodluck Jonathan to respond to the raid.

A day after the incident, Mr. Jonathan was photographed singing and dancing at a political rally in Kano State, despite at least 75 people having been killed in a car bomb in Abuja on the same day the kidnapping occured.

Mr. Jonathan has said the abduction of the school girls is the “beginning of end” of Boko Haram. -PremiumTimes via Sahara