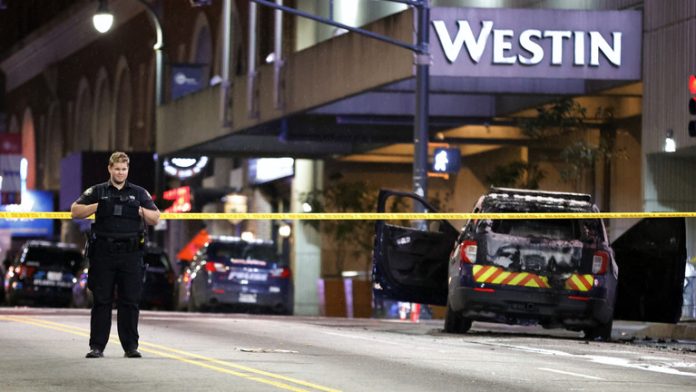 Hundreds of activists descended on downtown Atlanta on Saturday in response to a call for a “night of rage” after one protester was killed in a shootout with police earlier this week.

A crowd of mourners marched through the streets in what was described as a “largely peaceful protest” by a local FOX reporter. Masked activists began throwing rocks and shooting fireworks at the Atlanta Police Foundation headquarters, causing the event to turn violent.

According to multiple photos and videos shared online, rioters smashed the building’s windows with hammers, vandalized walls with anti-police graffiti, and set at least one police cruiser on fire.

“Atlanta is safe, and our police officers have resolved the downtown disruptions from this evening,” Mayor Andre Dickens said after police swooped in to quell the commotion.

“Atlanta Police have arrested six people so far, some of whom were carrying explosives. “These people intended to cause violence and used the cover of peaceful protest to conceal their intentions,” Dickens added.