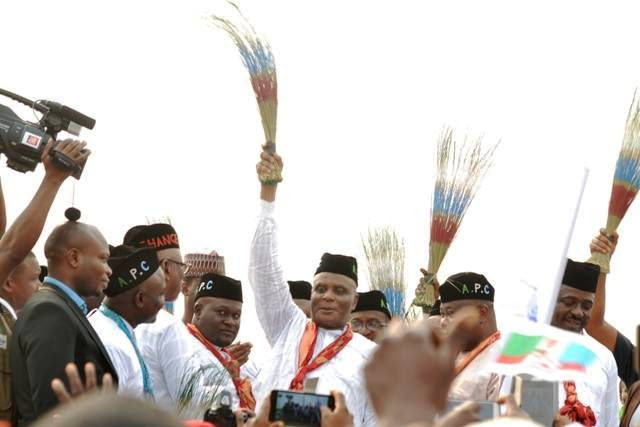 By Akanimo Sampson
CRISIS is currently rocking the Cross River State chapter of the All Progressives Congress (APC). This, according to inside sources, has to do with a fierce personality clashes among leaders of the party.

This, however, has to do with the defection of Clement Ebri, a former governor on the platform of the defunct National Republican Convention (NRC). Ebri has links with the Northern political establishment. But, some elements within the APC, a supposed party of the centre left, are not comfortable with his presence in the party.

Not quite surprising to watchers of the APC that Ebri has been suspended for allege anti-party activities. The ex-governor has just been admitted along with former Senate Leader, Senator Ndoma Egba, SAN into the Board of Trustees of the governing party,

Those who tend to know better say APC is having a running battle with party faithfuls in his Mkpani/Agoi Ward, in Yakurr Local Government Area in what many say is a battle between Ebri and the Minister of Niger Delta Affairs, Usani Usani over who controls the politics of the party in the Central Senatorial District.

In a letter dated March 21, 2016 and signed by 17 out of the 20 executive members, including the Chairman, Monday Emma Oboma and Secretary, Joel Ekpo Agbor of Mkpani/Agoi Council Ward of Yakurr ‎local government area, addressed to the Chapter and state executive of the party in the state, the Monday Emma Oboma leadership said that an investigative panel set up by the Mkpani/Agoi ward of the party has indicted the former governor of anti party activities.

The letter reads in part, “We write to you‎ as required by Article 21 Section B, subsection vi (b) as the local adjudicatory body of first instance over complaints or allegations from the Ward level.

“A report of anti party activities was forwarded to the Ward and a 7 man panel was constituted ‎to investigate and report to the Ward Executive within 7 days of receipt. The Committee’s report officially indicted Chief Clement David Ebri of anti-party activities before and during the Yakurr II State Constituency re-run election of 12th March, 2016.

In another letter signed by 22 members of the Yakurr Chapter of the party including the Chairman, Abam Eteng and Secretrary, Omini Usani, the Chapter excos say the Ward executives acted in line with the provisions of the constitution of the party.

Part of the letter reads, “The Yakurr Chapter Executive ratify ‎the above anti party report against H.E. Chief Clement D. Ebri by Mkapni/Agoi Council Ward, hence the Ward Executive of Mkpani/Agoi council acted in line with the provisions of the APC Constitution as amended in October, 2014.”

For Ebri, the unfolding circus show in the state is laughable. He simply says the leadership of the party at higher levels was more appropriately positioned to respond to the development and not himself since he is a party to the allegations.

Vice Chairman of the party in Cross River Central Senatorial District and former member of the state House of Assembly, Cletus Obun, says the purported suspension of Ebri can only stand in the imagination of those who claimed to have suspended him and not in the scheme of things in the party and declared that the action was a nullity.

“Those people are jokers. Article 21 (b) of the party Constitution has no provision for Ward excos to discipline a member of the Board of Trustees of the party and Chief Ebri is not only a former governor of our state, he is a member of the BoT of our party. As I speak with you, the party does not have any exco in the Yakurr Chapter after the death of the former Chairman, Atang Iye Atang. Anyone purporting or parading himself as Chairman of the party in Yakurr Chapter is an imposter and should be disregarded.

“Those talking about the suspension of the elder statesman and a former governor of the state in the status of Ebri do not have the support of the party nor the constitution. They are agents of some people who are afraid of the expansion of the party. There are some people in the party who feel threatened by the growth and expansion of the party. They are content with being party Chairman of Secretary and don’t care whether the party wins elections in the state or not. So party office has become more important than winning election. They feel that when the party grows, their influence will reduce. There are the ones sponsoring the noise you are hearing.

The suspension of Ebri by the Ward excos does not enjoy the support of the National Vice Chairman, South South of the party, Prince Hilliard Etta who is also from Cross Rive State.

An elder of the party who did not want his name on print said, ”I think that some people are being over zealous and are allowing themselves to be used. The (National) Vice Chairman has not asked me to speak to the press about the issue but I can assure you that the action does not enjoy his support and the public should disregard whatever is happening and has been said and be rest assured that the party will sort out the lingering crises.”

The shadow political war between Ebri and Usani over who controls the Central Senatorial district in the APC is causing some worrisome internal bleeding of the party. Usani is highly inflamable as ffar the politics ofthe state concerned.