NewsRescue– It is no news that under the Jonathan government and the national security office of Sambo Dasuki, ex-terrorist MEND Ijaw youth have been arming and militarizing toward holding the nation to ransom in the event that president Goodluck Jonathan is loses elections in 2015 and is not president of Nigeria a third time. Terrorist Dokubo Asari, a Jonathan henchman allegedly just strongly verbalized this threat once again. 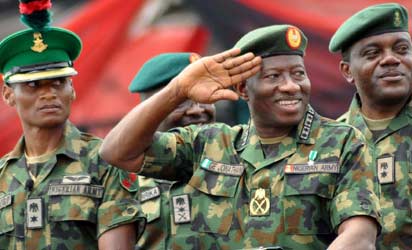 Goodluck Jonathan completed two years of Yar’Adua’s tenure then was elected to rule Nigeria for a second time. It is generally acknowledged that he promised and agreed not to seek a third time, saying that 6 years is enough to prove your worth. As life in Nigeria gets worse, and he sees he can leave no mark but the mark of failure in the 2 years to go, it seems, desperate to enrich himself, the president wants 10 years. Now he, his wife and few terrorist leaders from his clan who are money and power hungry, keep holding the nation to ransom that he must be re-elected to lead Nigeria for a third time, or else the ethnic militia being armed in the Bayelsa creeks will spill Nigerians blood.

These threats have been repeated publicly to the nation, right under the watch of the Inspector General of Police, Muhammed Abubakar, the National Security Adviser, NSA Sambo Dasuki, and the president, without recourse. Dokubo had said earlier this month that he too disregards president Jonathan, but only supports him because he is an Ijaw brother. Dokubo used the popular phrase, ‘monkey no fine but his mother like am,’ to make this confession on a Channel TV interview.

NewsRecsue recently alerted that there was serious arming of militia in the Bayelsa region: Nigeria: Militants Being Armed in Rivers State for “Operation Amaechi Must Go” — Intel