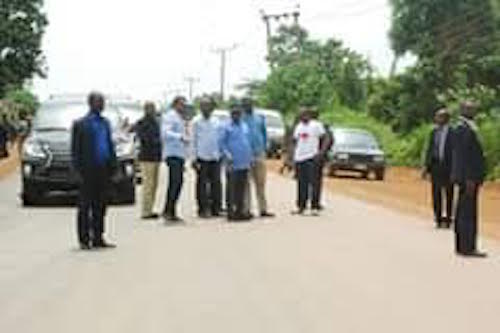 The construction of the 14-kilometre  failed portion of the Abakaliki-Afikpo road by Ebonyi State Government has reached advance stage.

Inspecting the road   at  the Abomege axis on Saturday, Governor David  Umahi, directed the contractor handling the project  to ensure the completion of the first phase of seven kilometres   before the end of this month.

He expressed satisfaction with the quality of work done so far on the road by the contractor and commended the Commissioner for Works, Engr. Fidelis Nweze, for his commitment and dedication to work.

Governor Umahi said, “We are very impressed with the quality of the road and the rate  of work.  .
“Recall that  the President(Muhammadu Buhari) gave us approval to construct with our own   fund  this portion of the road and put toll gate on it.  But  we are still studying  whether there is need to put toll gate or not.

“However, what we want to do first is to construct after which we start thinking of what to do.

“But the Federal Government engineers are always on this road to ensure that the quality of the road is assured.”

The governor said he was “very disappointed with what UNIGLOBE did  on their own section of the road,’’ stressing that  “if the company  fails to amend it, we will not allow them to collect another money from Federal Government.”

Engr.Umahi also inspected the Amangwu Edda double bridge under construction and expressed satisfaction  with  the quality and progress of work.

At the Amasiri/Okposi/Uhuru road contracted to CONROCK Ltd, he  also expressed satisfaction with the quality   and urged the contractor to continue with the pace.

At  the Uburu /Isu road, the governor    directed  the Commissioner for Works to intervene immediately by deploying  materials  to a point where a bridge work is currently ongoing.

He however  expressed delight with the job done so far  and re-restated his administration’s  resolve to complete the   15- kilometre  roads   in each of the 13 local government areas of the state.