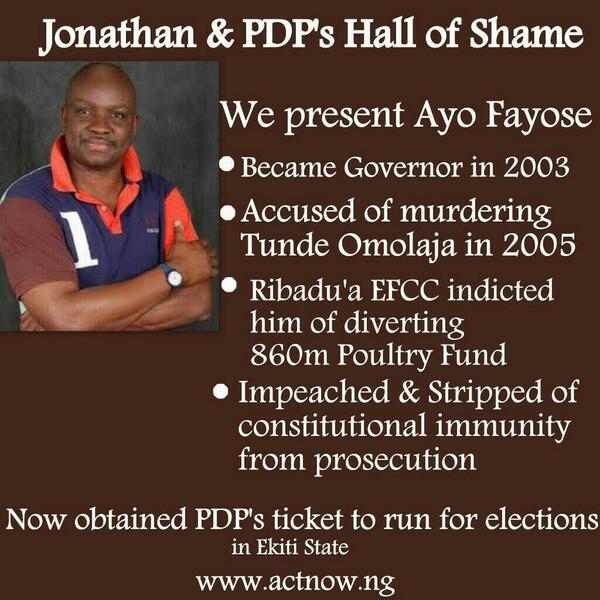 It’s election season once again and let me begin this letter by complementing you on your beautiful faces plastered around the capital city, or rather, the entire state. Don’t get me wrong, I am being sincere, you look great. Your Beautiful posters and billboards gives me something new to look at, divert my attention from the loads of abandoned projects, the plight of lots of unemployed Ekiti youths, deplorable condition of our roads, and the old blocks of classrooms in our only State-owned University.

I honestly believe that all of you are motivated with the idea of serving our dear Ekiti State. It’s the strength you use to carry on with this electoral race. As cliché as it sounds, it’s true, right? Most readers probably won’t believe me but I highly doubt corruption and greed is your number one inspiration to run – well at least, not yet, the story changes when temptation is laid out in front of you when you’re actually in position. However, this is not what I’d like to talk to you about; you’ve probably heard that argument in articles published long before this. This letter won’t also be about political dynasties, nor will it also be about a criticism on personality politics and the weird political party system of the country. This won’t be a letter of criticism at all. What use is it to criticize what’s already present, existing and never ceasing, as much as I would like to fight these issues, I believe it won’t take me too far as father and son tandems are already going around the state, as your faces are already plastered across the state and as some candidates are members of two political parties at the same time. But allow me to work with the current landscape of Ekiti politics. Let’s admit it, 99.9% of you are members of the elite class, you all have several cars, you all go home to a gated house, you probably have maids ready to address your basic needs, you probably have children in private or international schools, and you probably have your own pieces of luxury items. Again, I’m not going to criticize, it’s fine. It’s fine if you live this way. Who am I to judge you? I will not condemn you for living such lifestyle. I just wanted to ground these assumptions so that we’re on the same page.

I’ve already used the word “probably” several times from the beginning. You might have been annoyed or judged me for my lack of a more diverse knowledge of words. The reason why I kept on using the word “probably” was because I was describing your life, a life foreign to me, no matter how much I imagine what your lives as candidates are, I will never be able to know what it is like to be a politician. I can use my imagination and sympathize, but I can never empathize. The same goes for you when you are elected.

You are obliged to voice out the problems of thousands of Ekiti citizens, and let’s admit, your way of living is quite far from their own. You will probably use the word “probably” as well in describing their lives. “Probably they have nothing to eat,” “Probably they’re hopeless,” “Probably they’re not educated.” To a certain degree, you have an idea of their situation, as much as I had an idea of your situation in describing your lives earlier. But this is not enough. As their representatives who hold great power in the government, why not better the service you can offer by doing more research. And I’m not talking about statistics, but this is my proposal to all of you; to understand their conditions better by immersing yourself into their lives.

Keep the fancy suits for a day and wear a typical pair of jeans and a shirt. Go around hamlets and villages, disguise yourself not to attract attention. Ride a car or public transport and understand how cramped it gets during rush hour and the problems of the transportation system. Eat in a restaurant along the streets and see the food quality served to majority of Ekiti citizens. Eat there and
listen to the problems of the construction workers on a table next to you. Line up in government agencies without the VIP treatment and feel the inefficiency of some offices in giving simple documents. Have something treated in a public hospital and experience the kind of service of a public institution. Just for a day, live the life of majority of Ekiti Citizens and you’ll get a better perspective of their problems.
Don’t get me wrong, I’m not a sadist who wants to make it tough on you but I just want you to open your eyes to our realities. To the realities you may not have been seeing. Do not separate your lives to theirs. Do not rely on assumptions or create their stories in your minds and merely sympathize and speak on podiums on their behalf. If you dare speak on their behalf make sure you know what you’re talking about. They say experience is the best teacher, then go and do this research. Certainly doing this for a day will not give you absolute knowledge on their conditions but it can give you a better insight on the public you’ll be working for, on the society you’ll be serving.
So before this campaign ends, go and walk the streets of your town, pay attention to the worn-out street lamps, weak electric posts, dirty foot bridges and puddled sidewalks. See the things you never saw before living in your elite world. See this, feel this, experience this because this is Ekiti State. The majority does not live as comfortably as you but they most certainly deserve a life as comfortable as yours. Go out and do your research so that when you’re finally elected, your face plastered across the State will be the face to change and answer these problems.